Inside Carter Burwell's Cabinet of Wonders 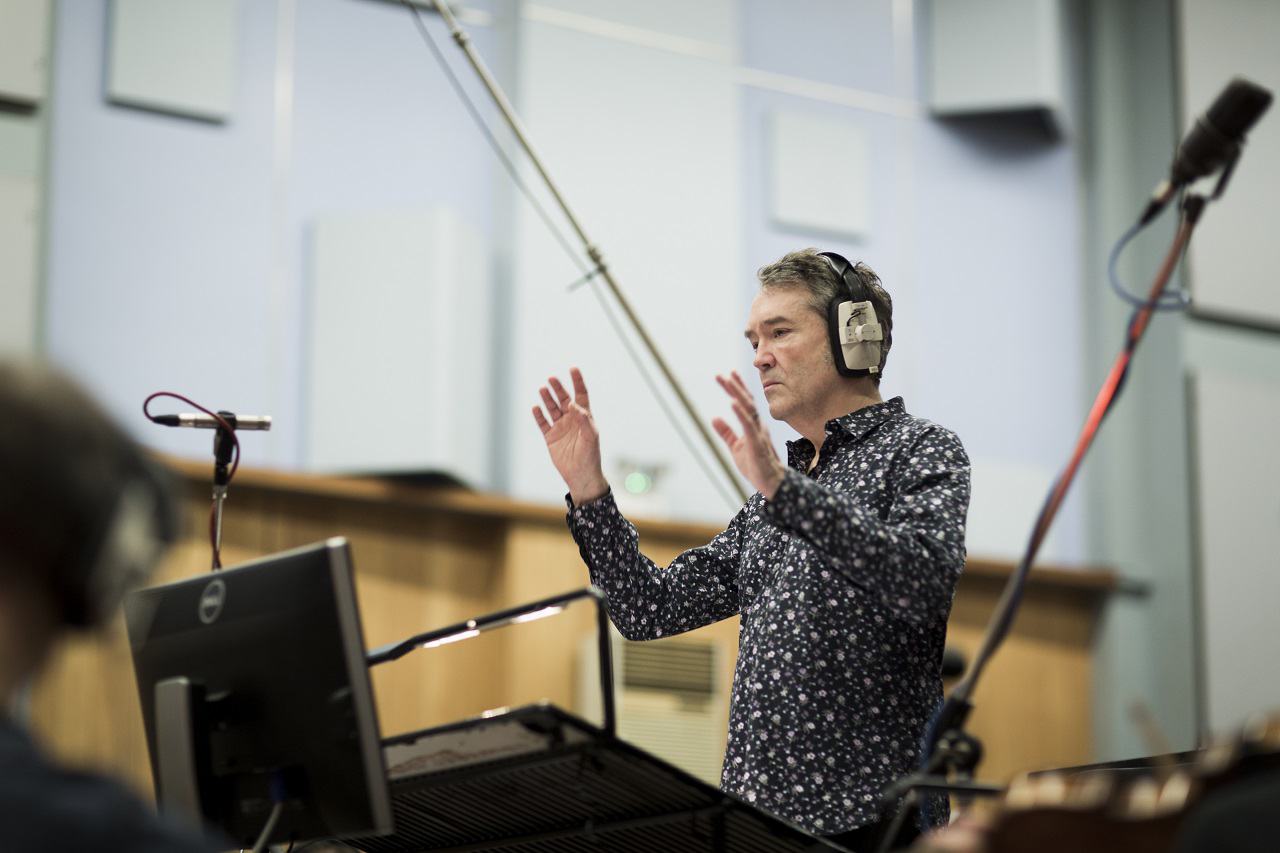 2017 might have been Carter Burwell’s year. With four scores very different from one another – John Lee Hancock’s The Founder, Simon Curtis’s Goodbye Christopher Robin, Todd Haynes’s Wonderstruck and Martin McDonagh’s Three Billboards Outside Ebbing, Missouri – Burwell’s rich, eclectic career seems to have reached a new peak. Today, Score It Magazine offers you a glimpse into Burwell’s work and tells you why he currently is one of the world’s most exciting film composers.

The soundtrack for Three Billboards Outside Ebbing, Missouri has already set high standards for the 2018 film scores, so we should expect all the awaited films and all the unexpected gems scheduled for this year to stick to these brilliant standards. With this score, American composer Carter Burwell brings us back to the blessed times of film soundtracks, when Ennio Morricone was the world’s busiest – and most acclaimed – composer and one of the most interesting experimenters in film music. Martin McDonagh’s outstanding latest work examines the crossed destinies of small-town inhabitants when one of them goes to war with the police, and more particularly targets the town’s well-liked sheriff. Inherently, Burwell’s pieces sound like a folk opera. Frances McDormand, pretty much like Claudia Cardinale in Sergio Leone’s masterpiece Once Upon A Time in the West, is the main motivation to the film’s musical dimension. Burwell shows Mildred’s state of mind, her hopes and despair; while her relentless quest for justice grows stronger, the score goes along with her and offers variations on the main themes, sometimes emphasizing her warlike behaviour and sometimes being much more intimate and closer to Mildred, the afflicted mother. Though Carter Burwell is far from being a stranger when it comes to black humour, his score for Three Billboards is devoid of irony as it perfectly catches the film’s dramatic dimension that results from the main character’s loss and her consequent inner moral conflict. The shortness of the score (approximatively 20 minutes overall) brings out its Morriconesque intensity and violence, making it one of the most powerful and saddest soundtracks of his career.

Carter Burwell’s sensibility for composing for images is something that transpired very early: a Harvard graduate, Burwell studied both animation and electronic music, and directed a short animated film while teaching at the Harvard Electronic Music Studio. He pursued these two parallel careers throughout the 1980s, working as an animator for computer-animated films as well as composing for theatre, dance and film. In 1983, while he was in the avant-garde pop group Thick Pigeon with no previous experience in the field of film score composition, he met Joel and Ethan Coen, who were looking for someone to compose the score for their first feature film Blood Simple, which they were editing. Although he never planned to pursue a career in film scoring, the year after the release of Blood Simple he was approached by Anthony Perkins, who was directing his first film ever, the third installment of the Psycho franchise. As a big fan of Perkins’ and intrigued by his ideas for the film, which he promised would be radically different from Hitchcock’s classic and its 80s slasher sequel, Burwell accepted the challenge and delivered a thrilling electronic score. Unlike Jerry Goldsmith whose score for Psycho II mainly relies on the atmosphere and on the cues written by Bernard Hermann for Hitch, Burwell takes a complete opposite approach in the Psycho III soundtrack: he mixes the instrumental themes from his Synclavier with eerie, quirky electronic sounds which, rather than trying to make Norman Bates look likeable, penetrate the bipolar disorder he suffers from and translate his split personality into music. The offbeat music from Psycho III – including pop-punk songs performed with Thick Pigeon* – and the composer’s ability to entangle the film’s dark atmosphere with the character’s complexity would be the matrix for his future career that would continue to soar from his next film (Raising Arizona) onwards.

The name of Carter Burwell is of course associated first and foremost with the Coen Brothers, as he scored fifteen out of their seventeen feature films. The Coens’ cynical storytelling and their unusual characters are Burwell’s experimenting playground for dissonant, grim and (unconventionally) non-orchestral scores that often embrace the genres deconstructed by the directors. Undoubtedly, his most compelling work for them and probably the purest expression of their collaboration is the beautifully quiet, yet melancholic score for Fargo, that never hints at the comedic side of this two-time-Oscar-winning noir-ish drama. Examples of the composer’s sound and musical experimentations are legion in the Coens’ filmography, from the nearly absent soundtracks in Barton Fink and No Country for Old Men (where the mystery is reinforced by the omnipresence of sound design which serves as music) to the haunting pieces from A Serious Man, Miller’s Crossing and True Grit. Although the cinematic world of the Coens is often reminiscent of the classic Western era, the musical works from Carter Burwell play with this all-American environment rather than frankly embrace the genre: it is the case with Raising Arizona in which the score is dominated by crazy banjos that enhance the combination of adventure and comedy.

The association between the Coen Brothers and Carter Burwell rapidly aroused the interest from other talented directors such as Todd Haynes and Spike Jonze, for whom he scored several films. It is important to notice that both directors, beyond their strongly independent status, share a bound with music as strong as Burwell’s bound with cinema: Jonze has been one of the most-respected videoclip directors since the 1990s and Haynes’s films often deal with contemporary music. The consequence  is that both of them offered Burwell the opportunity to compose his most compellingly weird, dark but always emotional scores: Being John Malkovich, Carol, Adaptation and Where the Wild Things Are. As it was the case with the Coens, Burwell’s scores for them deal with love, friendship, childhood, family and self-questioning journeys with a completely unexpected approach. While still blurring the line between the intimate bubble and the self-questioning aspects of his music, Carter Burwell’s pieces bloom into the characters, giving them just the space they need to become poetical subjects. His recent score for Wonderstruck, directed by Haynes, is an ode to the kids’ innocence, their hopes, their fears and feelings as they embark on a personal, magical journey to New York – the composer’s birthplace – that changes their lives.

Carter Burwell’s unusual style led him to write and compose music for unusual films. In the historical drama Rob Roy, the score remarkably stays away from the blockbuster clichés and subtly blends with the traditional Scottish music that complements, with an unusual softness, the haunting themes composed by Burwell (with the participation of the Scottish band Capercaillie). The same year, in a totally different manner, James Horner‘s score for Braveheart brought an overwhelming splendour to Mel Gibson’s 13th Century epic. In 1997, Burwell composed the ominous soundtrack to Mathieu Kassovitz’s crime drama Assassin(s), in which silence is an important factor to the uneasiness brought by the film’s ultra-violence – he is thanked in the end credits for bringing “the right notes at the right time.” The pieces are very short, dark and they are never used to underscore the violent and disturbing sequences. More recently, the composer wrote the heartrending themes for three of the five Twilight films and started an important collaboration with director Martin McDonagh: his three pitch-black comedies In Bruges, Seven Psychopaths and Three Billboards Outside Ebbing, Missouri are magnified by counterpointing scores that express the fragility of the characters.

Nearly thirty-five years after his first compositions for film, Carter Burwell is one of the most respected composers in the world of film scoring but he does not hesitate to take risky paths and to commit to alternative and unconventional projects. He is currently working with the Coen Brothers for their upcoming Netflix series The Ballad of Buster Scruggs, which will tell six different tales set in the Far West.

* At one point, Burwell worked with a then debuting composer, Danny Elfman, to write a song that would use a sample of the famous Bernard Hermann strings from Psycho, but things did not work out. Thirteen years later, Elfman scored the remake of the Hitchcock classic by Gus Van Sant, using the same samples.

The World Soundtrack Awards 2018: A Recap