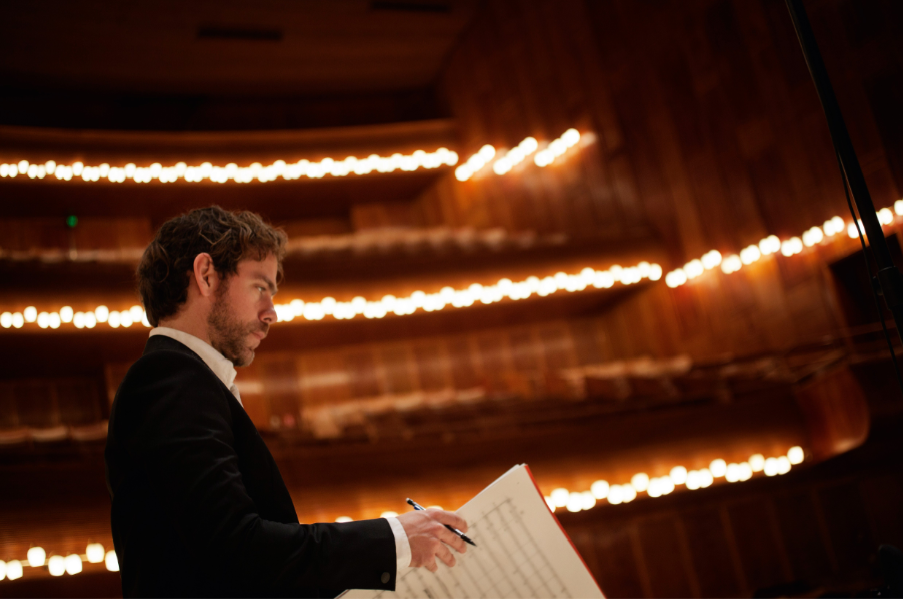 In light of the quality and versatility of his work and collaborations, it should be safe to say that Bryce Dessner is undoubtedly one of the most eminent and prolific musicians of the past decade. In addition to being a founding member, guitarist, arranger and co-principal song-writer in The National, Dessner excels when it comes to collaborating across art forms, jumping seamlessly from rock to classical music, from film scoring (he co-wrote the soundtrack of Alejandro González Iñárritu’s Oscar-winning The Revenant with Ryuichi Sakamoto and Alva Noto) to classical composition (for sisters Katia and Marielle Labèque or for violinist Pekka Kuusisto for instance) or stage work (collaboration with Irish playwright Enda Walsh to come soon).

The composer leaves his mark on the end of 2019 with the brilliant music for The Two Popes, directed by Fernando Meirelles and released on Netflix on December 22. He writes a delightfully charming score to accompany the unlikely friendship between two of the most powerful religious leaders in the world, Pope Benedict (Anthony Hopkins) and Cardinal Bergoglio (the future Pope Francis played by Jonathan Pryce).

Bryce Dessner took the time to answer a few questions we sent him via email, between two sessions in his studio and reveals details about his creative process on Meirelles’s film, talks about his inspiration, his work with The National and tells us what’s coming up for him in the near future.

Score It Magazine: I read you were fond of Fernando Mereilles’s films, what do you like in his cinema?

Bryce Dessner: There is a intensity in everything that Fernando does, and also a certain economy to the way he shoots a scene and then focuses everything in the editing that I feel drives deep into the essence of the narrative and character development. I felt that in watching many of his films and in making The Two Popes and watching him work, I very much felt that Fernando has a keen sense of finding the core essence of what he is trying to say and not wasting time and energy on superfluous details.

How did you two meet and how did you arrive on The Two Popes?

I was originally contacted by Tracey Seaward who is one of the producers on the movie and an incredible person and huge part of this movie. Tracey, along with the other two producers, Jonathan Eirich and Dan Lin, were very supportive of me scoring the film, and I came to Rome to meet Fernando Meirelles and also Fernando Stutz, the editor of the movie. They had already put some of my music into the first cut of the film as a test and we had an amazing conversation about the film and the role that music could play. Fernando was definitely interested in the diversity of my experience and my work with strings and voices. This was the first experience I have had where I got to actually be on set with the actors during the shooting and absorb some of the energy around the work process. This was very helpful as I got deeper into the score. I started composing a few of the first themes in the room with Fernando, Anthony Hopkins and Jonathan Pryce as they were shooting some of the scenes from the Sistine Chapel.

Did this visit affect in any way your writing process for The Two Popes?

The screenplay for The Two Popes was originally written by Anthony McCarten as a play and it is very much focused on the powerful dialogue between Benedict’s and Bergolio’s characters — in such a way that I wanted the music to also have a conversational quality to it. My initial ideas for the film were written as intimate chamber music focusing around this idea of dialogue, but also exploring the possibility of two different sound worlds to embody each of these powerful characters.

The film is almost entirely built on the dialogue between the two main characters. Did the amount of dialogue made it hard for you to find the right tone for the score?

I think it speaks to the power of the script and the acting, and the way it was directed that I wasn’t really trying to score too much of the big dialogue scenes… There are moments with prepared piano and high distant strings and some percussion sounds, but for the most part, the intense dialogue scenes are left without music. 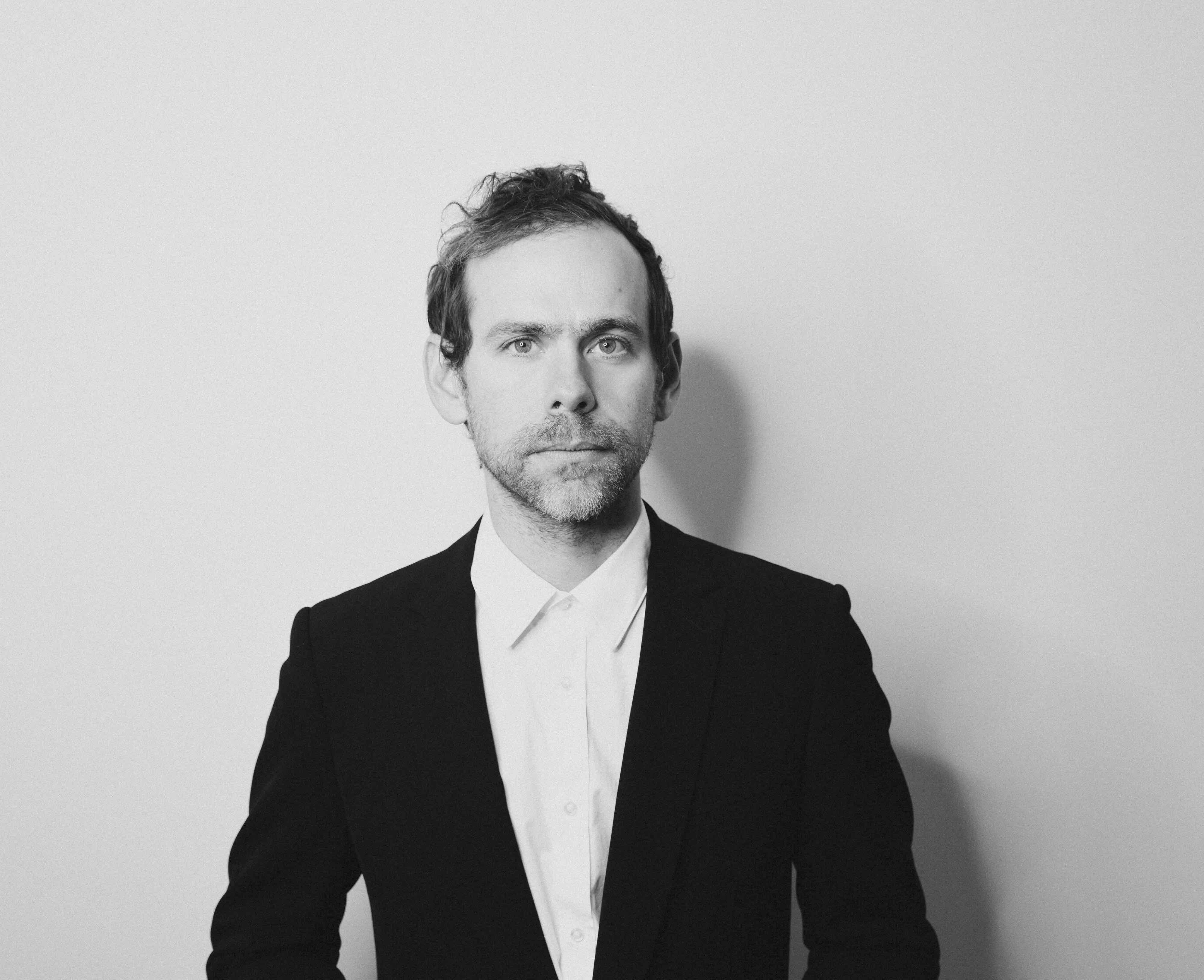 The track ‘Pope Francis’ was released before the score in its entirety. What can you tell us about the structure of this piece, which starts with a warm delicate guitar before the orchestra kicks in?

After a month or two of exploring sounds we settled on the sound of the nylon-string guitar as central to Bergoglio and later Francis’s character. I grew up playing classical guitar and was trained at Yale and spent many years playing Bach, and Spanish and South American music.  So it’s a sound world that comes naturally to me and that I love. It’s been years since I have recorded in that way but I still own two beautiful hand-made concert classical guitars. It was really fun to use them for this score and most of those cues I recorded myself at my studio in Paris.

How long did it take to record the score at Abbey Road with the London Contemporary Orchestra?

We had two days working with LCO and the team at Abbey Road, which was a really amazing experience. I have been very lucky and fortunate in my life as a musician to have so many special experiences making music but I think recording at Abbey Road is something that is really unlike anything I have done. The London Contemporary Orchestra are an amazing group who I have worked with before in the concert hall. They have an extremely high level of musicianship in the group and people who intuitively understand the type of colors and sounds I was going for, and really are not a typical film music orchestra. It was really wonderful to finally do a project with them. Abbey Road  is so historic but also full of incredible energy and just amazing creativity. Peter Cobbins and Kirsty Whalley, who are really the best film score producers in the world, recorded and mixed the score which was such an incredible luxury, and we really became good friends during the process.

To what extent did Mercedes Sosa and Dinu Saluzzi influence you?

I spent a lot of time listening to Mercedes Sosa and Dinu Saluzzi—two of the greatest Argentinian musicians, whose music is an important part of the film as well. In particular Mercedes Sosa’s song ‘Cuando Tenga La Tierra’ plays during a key moment in the film and I was composing music into it and out of it for one of the most intense moments in the movie. I have always loved her voice, so it was beautiful to be able to interact with her music more closely through the film.

How did composing for film has influenced your other activities? Would The National have created a visual album if it wasn’t for your involvement in film music?

I think all of us in The National are huge fans of cinema so I don’t think my own experience scoring films necessarily played a bigger role than any of the others. More than anything we were all huge fans of Mike Mills, the director who we made I am Easy to Find with. For me, it was really fun to have my worlds combine more on this project, as very often I score films alone—so it was fun to work on this short film with The National, and also for the band to allow the film-making side, and especially Mike, into the studio with us. I think, by nature, directors are very good at managing large unwieldy collaborative teams— which is kind of a good description of a rock band.

You made your NY Philharmonic debut last month. What are your feelings on this experience?

I have played with many orchestras in my life but there is only one New York Philharmonic. The musicians are truly transcendent in every way, maybe a bit intimidating, but deservedly so! It’s an experience I will always remember. Also the piece I wrote for them I also play electric guitar in and it was apparently the first time the NY Phil had ever had electric guitar onstage.

I have recently completed a big new string quartet for the Australian String Quartet which will be performed live as a score for a new dance work by choreographer Rafael Bonachela for the Sydney Dance Company. The piece will tour quite a lot around the work in 2020 so I am very excited about that.