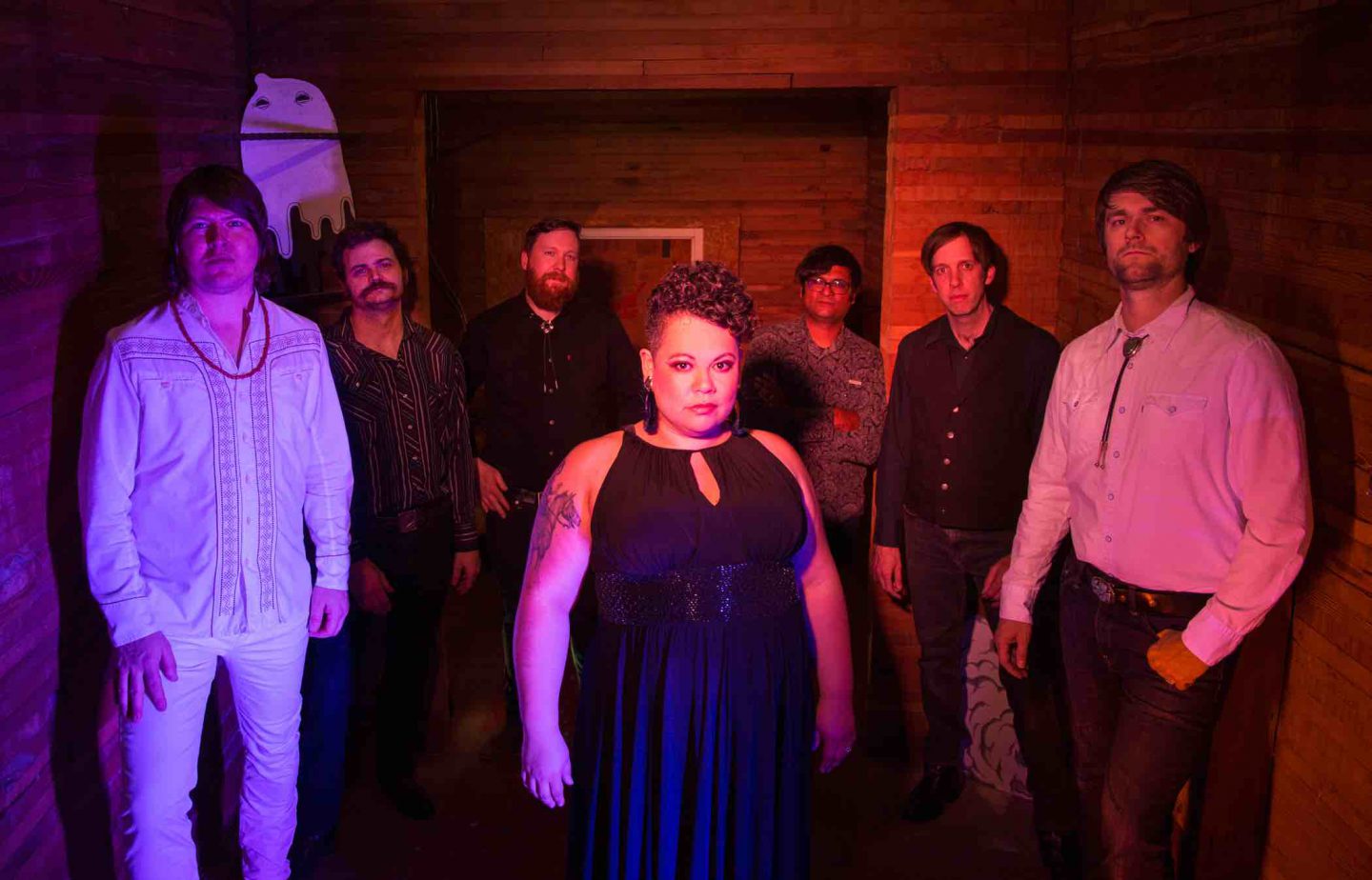 The sound of Portland-based band Federale sinks its roots deeply into the rich cinematic sound and imagery of European cinema of the 60s and 70s, and more particularly into genres such as Spaghetti Westerns and Giallos. The seven-piece ensemble, spearheaded by longtime Brian Jonestown Massacre bassist Collin Hegna, was conceived as an outlet to channel inspiration from that era.

When you listen to the band’s latest effort No Justice, you feel the scorching sun on your face and the desert dust finding its way through the very last fold of your clothes. The spectral vocals of Maria Karlin in the eponymous opening track or ‘Unchained Malady’ lead you to an eerie and unsettling ghost town on the edge of the wilderness, as the tumbleweed rolls on the lonely road dividing the monotonous landscape.

The cinematic quality of Federale’s sound has been used oftentimes in the last few years in a variety of films ranging from The Lego Movie (‘War Cry’) to the films of Ana Lily Amirpour (The Bad Batch, A Girl Walks Home Alone at Night), thus channeling the legacy of Ennio Morricone.

Collin Hegna picked in exclusivity for Score It Magazine his most inspirational soundtracks, those that give Federale’s sound its unique colour. 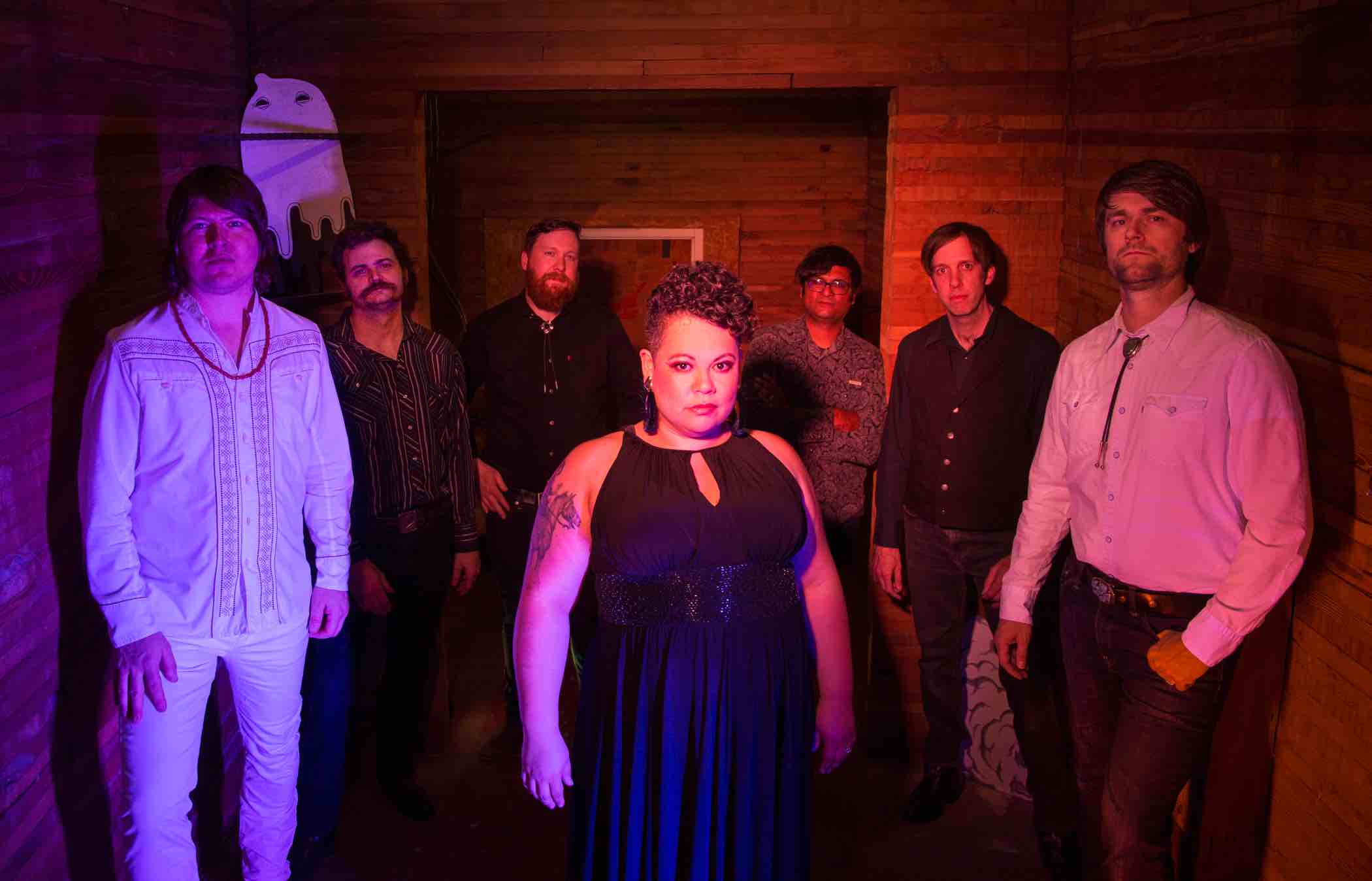 Of all the great horror scores through the years, none really captures the cold terror of the genre quite as iconically as John Carpenter’s original Halloween theme and score. The likelihood of a (up to this point) B-Movie director also being a fantastic composer still seems hard to believe. But at the time it was a shocking revelation. It opened the doors for many DIY film creators such as Robert Rodriguez (who would also occasionally provide his own scores). The music itself is spare. The main theme itself is built around a repeating three-note pattern that varies and builds to a terrifying crescendo. The instrumentation features some arpeggiated synths, piano, and huge synth pads to convey the dread struck into all of our hearts by the movie’s villain Michael Myers.

After making three films with Ennio Morricone providing the score, director Dario Argento went looking for a new sound to his Italian horror thrillers. He found Goblin. Goblin was essentially a four-piece Italian progressive rock band that featured Moog synth, chorused-out bass, Jimi Hendrix-inspired electric guitar, and disco drum beats. This was not exactly an obvious recipe for horror film musical magic. But the music Goblin created for Argento’s highly stylized films (especially Suspiria) was truly terrifying and otherworldly. The title theme to Suspiria is Goblin at its darkest. The songs intro features an eerie piano, synth, bouzouki and tabla. This tapestry gives way to a bizarre synth filter sweep that ushers in a frenetic drum beat. As this carries on, synth strings punctuate the darkness as the word “Witch” is freakishly chanted in a thick Italian accent. This soundtrack is truly unique, ground breaking, and thoroughly terrifying.

You can file this under “THE best soundtrack to a not-so-hot film EVER.” I mean, to be fair as far as 60s Italian psycho-sexual cult schlock goes, this really isn’t that bad of a film. It just makes NO SENSE. And good luck even finding a watchable copy of it. But it doesn’t matter. This score features perhaps my favorite pieces by the Maestro. The main version of the title track (there are three versions) starts with a male voice intoning “Wah-wah” over the top of a held string cloud and a descending glockenspiel arpeggio. It’s creepy and oh so Italian. The main body of the song is built around a repeating descending chord progression with successive layers being added and then stripped away. Soprano Edda Dell’Orso starts low with her  “Oooh” and slowly rises to what must surely be the top of her range. All the while, entire choirs and orchestras swell up behind her to create a euphoric climax. If only the film could deliver what this music promises!

The Good, the Bad and the Ugly (1967, dir. by Sergio Leone and music by Ennio Morricone)

Up until the rise of the Italian (Spaghetti) Western, scores for westerns (especially American westerns) were almost always cheeseball rehashes of Aaron Copeland’s Rodeo ballet. There was a certain “Ah shucks” and “Why, thank you Mam!” in every score. There was nothing dangerous or badass about these scores or the films themselves. The Italians in the 1960s to this white hat vs black hat paradigm and threw it out the stagecoach window. No-one in these Spaghetti Westerns was good. Nor were they all bad. Certainly some of them were ugly. But every character had shades of all of these traits. It was more true to real life. And with that came the music of Ennio Morricone to accentuate the deepened levels of drama. Ennio’s score for this film is absolutely badass. It is also ominous and, at times, heart warming. The score features electric guitar, Mexican classical guitars, Greek ocarina, group chants, whistles, operatic vocals, immense strings sections, a drum kit, huge choirs… It all culminates in the most iconic three-way gun battle in movie history. All fueled by the lust for gold! A seamless integration of cinema and music that combine to create a whole greater than the sum of its already great parts.

In the wrong hands, the concept of an ambient synth jazz soundtrack to a rather strange who-done-it TV show could be an utter disaster. Especially in 1990. But this is no ordinary TV show. And both Angelo Badalamenti and David Lynch knew how to play with homage to cheesy 50s aesthetics in a way that was self-aware and somehow terrifying. It’s as if you were witnessing something soothing and familiar but there is something beneath the surface that has gone terribly awry. Though you can’t quite put your finger on it. The instrumentation is quite simple for almost all of the cues. It’s essentially a jazz quartet: keys, guitar, bass and drums. The bass often is a baritone guitar with heavy tremolo and the keys switch between synth pads and Fender Rhodes. Occasionally chanteuse Julee Cruise shows up to provide the torch singer roll in a vocal style somewhere between jazz crooner and Doo-wop girl group leader. The lyrics to the actual “songs” in the show and accompanying soundtrack record are penned by writer/director/genius David Lynch. They are simultaneously very direct and completely obtuse. Lending to the dreamy soundscape. But with a heavy nod to the terror that nips at the edges of reality.

Other contenders for consideration:

– The Great Silence (1968, dir. by Sergio Corbucci and music by Ennio Morricone)

– Mandy (2018,dir. by Panos Cosmatos and music by Jóhann Jóhannsson)

– There Will Be Blood  (2007, dir. by Paul Thomas Anderson and music by Jonny Greenwood)

– The Shining (1980, dir. by Stanley Kubrick and music by Wendy Carlos & Rachel Elkind)

– The Sicilian Clan (1969, dir. by Henri Verneuil and music by Ennio Morricone)

No Justice is available now.

Many thanks to Federale and to Collin for this great selection!