With I Lost My Body, Jérémy Clapin signs one of the finest French films of 2019. Awarded at the Cannes International Critics’ Week and at the Annecy International Animation Film Festival, the animated flick tells the unlikely adventure of a severed hand that escapes from a Parisian laboratory in order to be reunited with its body. The body is Naoufel’s (Dev Patel in English/Hakim Faris in French), a delivery man/woodworker’s apprentice who falls in love with Gabrielle (Alia Shawkat/Victoire du Bois), a  librarian. But it would be very reductive to sum up such a rich film to the two previous sentences. Clapin gives his film a flavour of Greek tragedy when he intertwines our three heroes’ narratives and goes back and forth between past, present and future. Love and bereavement are at the heart of this lyrical, poetic yet realist and modern tale which offers a very soothing point of view on separation and loss.

The Hand of I Lost My Body is very different from Thing, the Addams family’s cheeky hand-servant. It’s a fully-fledged character and composer Dan Levy, that the director describes as the film’s co-author, injects life in it. The composer writes a  gorgeous and powerful score in which he blends synths and strings. The eponymous track which serves as the main theme starts with an electronic melody and goes crescendo until the strings come kicking in and make you feel all the feels. It’s simple and it’s terrifically effective. Levy’s music really reminds you of Carpenteresque scores and evokes the work of Cliff Martinez for Nicolas Winding Refn’s series Too Old to Die Young, or Clint Mansell’s score for the Black Mirror episode “San Junipero.”

Although I Lost My body is his first animated film, Dan Levy is no newbie in the film score world. He was a composer for film when he met Olivia with whom he founded indie French/Finnish pop duo The Dø. Then followed 3 albums and 3 tours which left little time for film composition. He’s now back to where his journey started and tells us everything about his foray into animation. 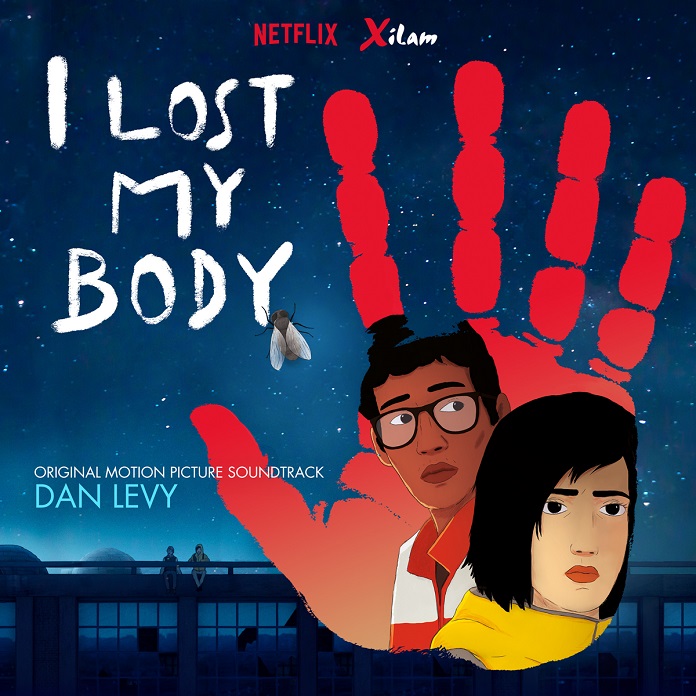 Score It Magazine: The production of I Lost My Body started in the early 2010s, when did you arrive on board?

Dan Levy: When I arrived, they had the whole story written, they had recorded the voices. I only had some visuals. It was July 2018.

Can you tell us more about your collaboration with Jérémy Clapin? Did he call you?

It was a bit more complicated. There was a casting, and I hate castings. I said I didn’t have the time. But three weeks later I called my manager to say that I was willing to write some music if they still wanted me to, but with no visuals. I wrote twenty minutes of music in two days that I sent to the director and to the producer.

What did you rely on for inspiration?

I only relied on the story. I had had a chat with Jérémy beforehand. What Jérémy liked is that I asked to talk to him and it seemed I was the only composer who requested to do so. I had a phone call and we talked for thirty minutes. He explained some things to me about the film and and this nourished my inspiration.

Do you know if they had temp music before you jumped in?

Yes, of course, and this is the worst thing that can ever happen to a composer! But at the same time, they have no choice but to use some temp music for the rhythm of the film, for everything to be at the right place. Some directors manage to distance themselves from temp music, but some obsess over the temp music they used. A lot of directors say, ‘THIS is what I want, so sort this out.’ And this is something I don’t like.

These cases are lost creative opportunities, when directors want to force music in a mould they created themselves…

Exactly. In pop music, we don’t work like this. I would never tell a songwriter, ‘Please, change all the lyrics.’ Or the melody. This is nonsensical. It’s very hard to talk about music because it’s hard to put words on it. The only way to talk about music is to listen to music. If you reach out to someone, trust is important. And that’s why Jérémy was so important in my life and on this film: he trusted me.

In the credits, I saw that you played almost all the instruments yourself for this score…

Yes, that’s how I work even in my non-score music. It also depends on the budget: I was lucky to have strings —the Sinfonia Pop Orchestra— but you can’t splurge. The theme of destiny being at work is very important so I wanted something to evoke the cyclical nature of destiny. The theme of childhood is also here and the first instrument that came to my mind is the recorder. The guitar, the piano would have been out of place, I think. I had a synthesizer and the record mode on it had a twisted sound which evoked the fly. I wanted to go against this destiny at work, so I wanted something very linear. And the recorder is very linear to me. And there was the ‘body language’ of the Hand. But we needed to avoid ‘Mickey Mousing’. I was not familiar with this word, but it means that we had to avoid syncing the music with the actions on screen. The role of music is to inject life into the Hand.

Jérémy Clapin says you’re the co-author of the film. Do you feel that you lend your voice to the Hand that is disembodied? I am not sure it’s the right word given that it has its own body language, voiceless is a better choice of word.

We have three different time lines: the past, the present and the future. You really have the feeling that the Hand is breathing, like when it dives into the bath tub, you really feel that it’s liberating for it, it calms it down. Jérémy says that the music gives an additional dimension to the film. A dimension you don’t see inside the story, the emotional dimension. Jérémy wanted synth music and I fought to bring in ‘real’ instruments such as the strings. But I think it’s a graphic artist thing, they are geeks, maybe that’s why he wanted synth music! Many people on the team come from a video game background, and this emerges in their tastes. But the orchestral dimension that I brought is unlike that of a Disney film, and it gives a live action dimension to the film. 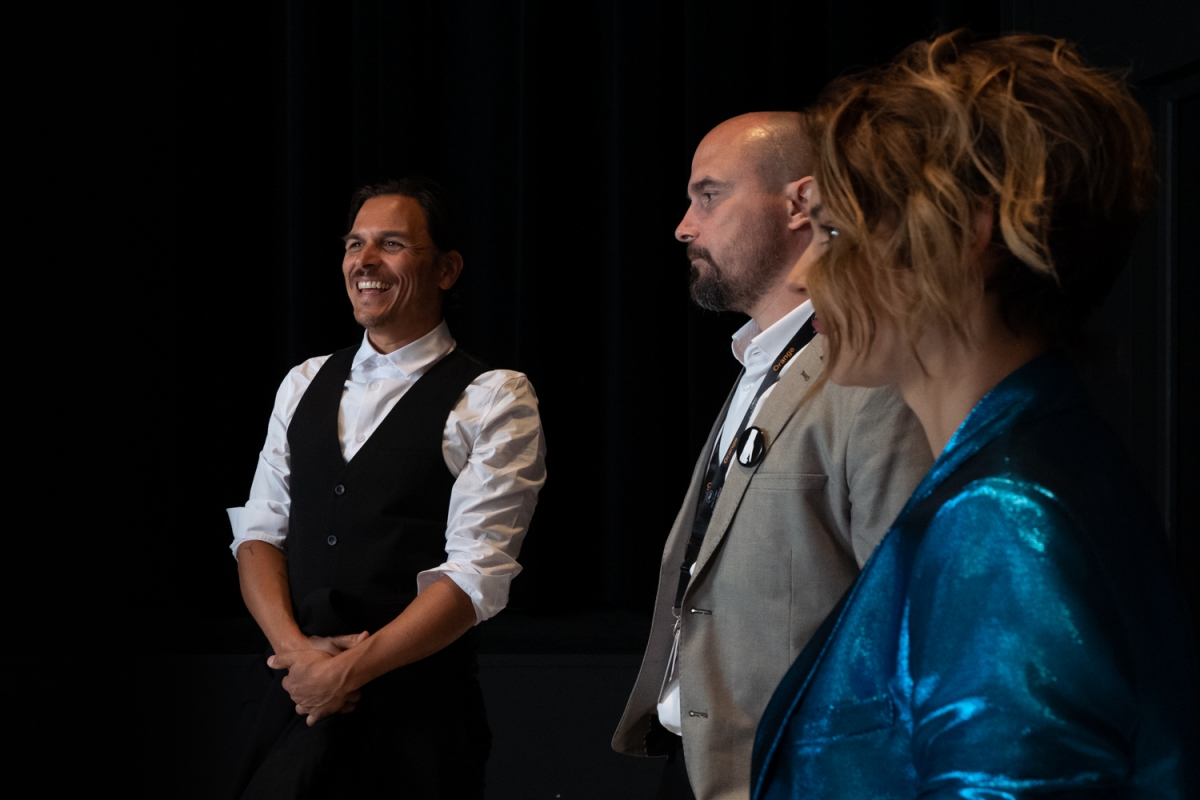 Can you tell us more about about L’ordre du périph, the band that performs ‘Sale soirée’?

I was president of the jury at Les iNOUïS, at French Festival Le Printemps de Bourges in 2018. It’s a springboard for emerging artists. L’ordre du périph’ won, and I loved them. They had that additional oomph that the other bands competing were missing. When Jérémy told me that he needed a hip hop track, I immediately thought about them. They wrote the lyrics and I wrote the instrumentation. They’re really young, 19, 20 years old maybe.

And what about Laura Cahen‘s closing credits song at the end, ‘La complainte du soleil’?

They were looking for a track to conclude the film, and I told Jérémy about Laura, and he loved her. He first wanted to include her song when the igloo is built but I wasn’t really sure it was a good choice because it was bringing the viewer outside the film—‘Sale soirée’ is intradiegetic so the effect is not the same. I wanted continuity regarding the film score. They tried to put the song on the scene but it wasn’t doing any justice to the scene or the song.

We worked simultaneously. I had the basic sounds the sound designer and the foley artist had made. I made some more with the synths I was using and then it was a mix of our work. We met all in the studio, with Jérémy too, of course, and we made choices.