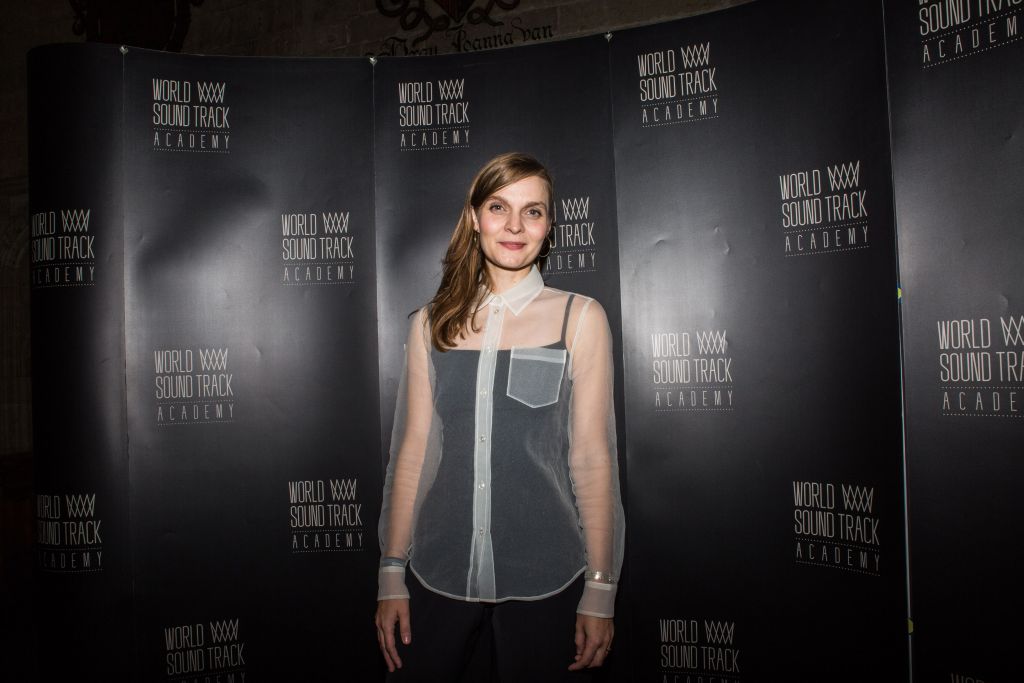 Hildur Guðnadóttir stresses several times during her masterclass at the World Soundtrack Awards that music is all about communication but that talking about her music isn’t her forte. Yet, the composer turns out to be incredibly gifted at describing her music, her job and her work process during this chat, wholeheartedly conducted by film music expert and former Fox Music chief exec Robert Kraft. Her love for her art is highly contagious and when you hear her talk about her compositions, she almost makes it sound easy, when it actually hides hours of meticulous creative dedication, on her own, in her studio.

She might be a solitary musician, but Guðnadóttir did not come alone to Ghent. She brought along her son—who rocked an amazing bedazzled dino jumper—and her mother, a musician too, who sold her car to buy her daughter her first cello. And let me tell you, the lady is the embodiment of ‘mum spirit’: at the front row of her daughter’s masterclass, she cheers, she laughs at Hildur’s jokes with an endearing motherly enthusiasm.

Music has always been a staple in Hildur Guðnadóttir’s life. Coming from a family of musicians, she started the cello as a kid and went on to study classical music, a field in which she soon felt held back by all ‘the rules, the dos and don’ts.’ As a reaction to that, she played in pop-rock bands with her friends during her teenage years in order to ‘get the space’ she was lacking with classical music. This rigidity was in contradiction with her views on music which should be about ‘communication and the personal bond that you have with people,’ according to her. She adds, ‘Growing up with musicians around me all the time, it was more about the people behind the instruments than the instruments themselves. The flute was a specific person, the cello was a specific person. The oboe was my aunt, the clarinet was my father. That’s still very much a part of my music.’

During those teenage years, the Icelander polished her curiosity and taste for experimentation. She then delved into electro-acoustic composition and began ‘composing more seriously and kind of stopped playing the cello for a bit.’ She tried some music programming too for a few years but it turned out to be a ‘very long and tedious process’ that finally bored her. Missing the instantaneity of music instruments, she eventually came back to the cello in her early 20s but on her own terms, ‘with fresh ears and a fresh point of view.’

Guðnadóttir is not on what MC Kraft calls ‘the usual suspects list’ for big studio productions, so he asks the cellist why and how Joker‘s director Todd Phillips reached out to her: ‘I think he had seen Sicario 2 […] and he really wanted to form a bond with music and with a composer from the very beginning.’ Composers seldom intervene that early in the production of a film, as in most cases, film music is considered as a post-production feature, with temp music being used in the meantime and the score being composed after the end of the shooting. For Hildur, writing this score was an on-going process that lasted throughout the shooting of Joker.

After getting in touch with her, Phillips offered Hildur to read his script and he asked the musician to write a piece based on her feelings from what she had read: ‘The script made a really strong impression on me. I felt a really strong connection to the character, I was just trying to become him […] For me, he’s really simple at heart and he’s really trying to understand why he doesn’t fit in but he doesn’t really get anywhere with it. It was clear for me that he needed something very simple.’

So Guðnadóttir sat with her cello and started toying around until she had an epiphany. Until she found what she calls ‘Arthur’s note.’ The movements from the upper chest she made while bowing the strings also helped her find his movements, she recalls. She sent the director the piece, he loved it, and that was it: ‘I think it’s a really beautiful thing when you don’t have to explain too much about what you’re working on because, for me, music should be communication enough. And I am really horrible at explaining myself when I am making music.’ She jokingly adds: ‘I didn’t tell Todd all this because I thought he didn’t want the whole philosophy behind it, like it’s an Icelandic weirdo thing, you know!’

Unbeknownst to her, a few months later, her piece helped solve a problem during the shooting of  the bathroom scene which occurs after Arthur kills the yuppies on the train. The script originally described Arthur Fleck going to the bathroom, trying to hide his gun and taking off his makeup. When shooting the scene, Joaquin Phoenix and Todd Phillips dismissed it, thinking that Arthur couldn’t care less about hiding his involvement in the killing at this turning point of his life. The director then decided to play Hildur’s piece to Phoenix and he started dancing. The musician was dumfounded when she watched the scene: ‘It’s Joaquin directly responding to the music […] It was magical because he was expressing exactly what I had felt when I was reading the script. And I was like “How did they know?” It wasn’t really until after the premiere that we all sat down together and we talked about it. And it was so magical that we had all experienced the same thing without saying a word about it to anyone. It was such an organic way to work together.’

After that her cello piece helped solve the script’s loophole, her music was regularly played on set and she was sent the dailies. This enabled her to see how the crew was responding to her work and it allowed her to write more, bring variations and expand the themes. Robert Kraft picks up on her anthropomorphised vision of music instruments and notes that it is a true ‘film composer instinct: many composers score the action in the film but [she] scored the internal life of the Joker.’

The process on HBO’s limited series Chernobyl was quite different. With a fictional character like Arthur Fleck/Joker, the cellist felt like she had enough room to ‘write fictional music’ and to tackle the story ‘from an emotional point of view.’ On the contrary, she explains, scoring the series demanded a more factual approach—as it is inspired by true events—in order to avoid an over-dramatisation of the narrative. As a consequence, Guðnadóttir adopted a quasi scientific method to create her score with a field expedition: she went to a power plant in Lithuania similar to what the Chernobyl one would be like to day, to discreetly observe and record the environment. She then realised that the music had to be the silent killer that can’t appear on-screen: the music had to be the radiation to illustrate the spreading of the poison, from the space to the people. ‘I went in there with very open ears, curiosity and a recording device. I found so many interesting sounds, it was really like treasure hunting. All the music is based on these sounds.’

The second ‘treasure hunt’ happened when she went back to her studio and sifted through the numerous hours of material she had in her possession: it took her ‘months to go through the recordings and to listen to every single second, every single frequency, every single piece that could musically work, until you found a “too doo doo doo.” You mark it and pick it out, then clear everything else away from it until you can hear it properly. Then you stretch it out, play with it, you mix them together, arrange them. There was a door that made a symphony of sounds. The melody the door made finally ended up in a hook that [she] stretched out, wrote chords around it, and made a linear piece of music with that.’ The only other addition to the sound library she used to write her score was her voice, ‘the emotional side of the story.’ Hildur sums it up pretty clearly: ‘I turned the power plant into an instrument.‘

The composer is well aware of the criticism that hovers above her Chernobyl score since the frontier between sound design and music is indeed fairly thin in Guðnadóttir’s body of work: ‘I came across a lot of discussion saying, “It’s not music, it’s sound.” I know a lot of people are irritated with this score, but it shouldn’t really matter.’ And indeed, labelling things isn’t what matters to the composer because the most important aspect of her job is to ‘highlight and serve the story,’ thus, egos should be left aside, she adds.

When asked about her future projects, Guðnadóttir understandably states that she is going to take a break. It is hard to guess where we will find her next as she won’t limit herself to one category: ‘I don’t specifically consider myself a film composer. I still do music, it’s just one of the things that I do. I don’t want to get stuck in only one thing. Only records. Only concerts. I want to have the freedom to do whatever I want at each time.’

When asked where she’s put her Emmy, she laughingly gestures towards her son and says that it’s in his bedroom, next to his Lego. The World Soundtrack Award for Best TV Composer of the Year (for her Chernobyl score) with which Hildur Guðnadóttir left Ghent will undoubtedly join it on the shelf, and we bet that both statuettes will soon be joined by a Golden Globe and an Oscar in the coming months.

Winner of the World Soundtrack Award for Best Television Composer of the year: #EmmyAward winner Hildur Guðnadóttir (@hildurness), with scores for the widely acclaimed @HBO-series #Chernobyl and the Icelandic hit ‘Trapped’. #WSAwards pic.twitter.com/SIhCJwJB7Q

Special thanks to Robert Kraft and the members of the audience for their questions.