Inspired by our partnership with the European Animation Awards, we celebrate all things animation for our November #AnimationMonth here at Score it Magazine! This wonderful award ceremony unites, celebrate and honours all the talent within the European Animation community. We talk you through the Emile nominees for the Best Soundtrack in a Feature Film Award and the Best Soundtrack in a TV/Broadcasting Production, so you are fully preped and ready for awards night.

Frederik Segers graduated from the Ghent Conservatory as producer and audio engineer where he grew a strong interest for composing. As a producer, arranger and sound engineer, he’s worked with many Belgian artists, showing an important diversity in throughout his work. Frederik is also a guitarist in bands including; Members of Marvelas (jazz/funk), Marvelas Something (alt rock) and Kartasan (rock). He composes and produces the scores of all projects from Belgium-based production company Thuristar.

Also graduating from the Ghent Conservatory, Jan Duthoy is best known as the keyboard player and guitarist of Belgian rock band Absynthe Minded. In 2010, he composed his first score for short film 27, directed by Nicolas Daenens. In 2016, he left Absynthe Minded and composed the score for My Knight and Me, with Frederik Segers.

Co-produced by French and Belgian companies, My Knight and Me is a 52-episode animated series telling the story and fun adventures of young Jimmy the Squire, the son of valiant Knight Henri of Orange, along with his friend Cat the Princess. 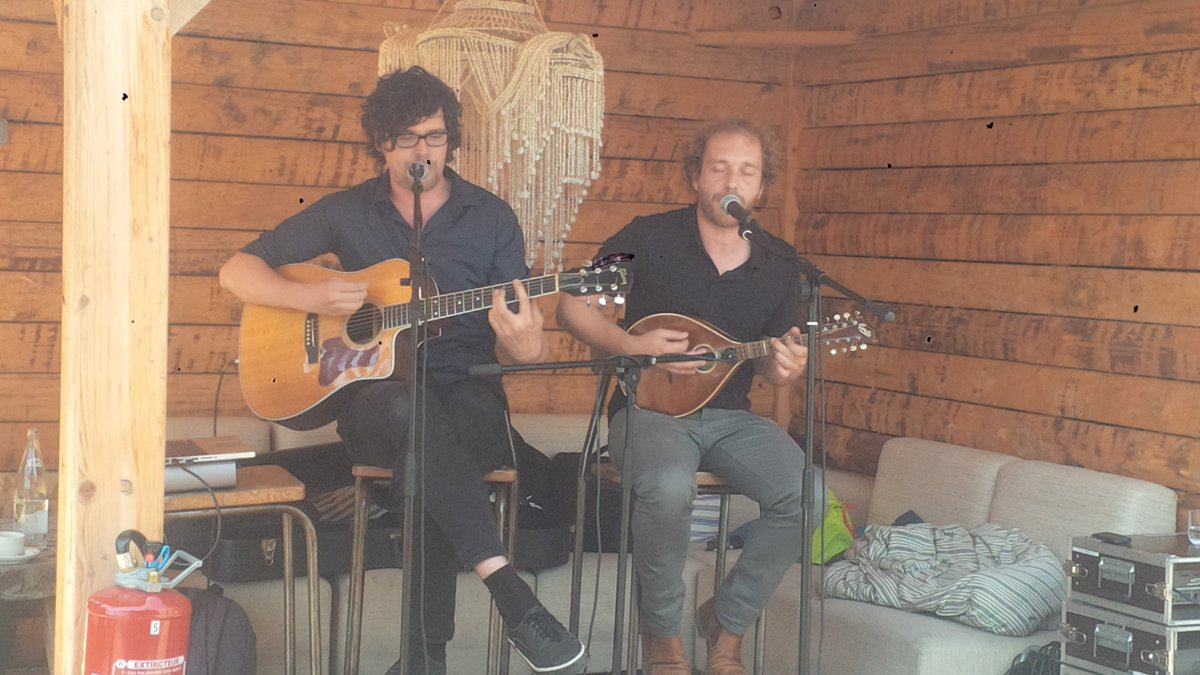 Jan and Frederik performing the at the Canal+ press conference

Score It Magazine: How did you two meet, and how did you get involved in this project?

Frederik Segers: Director Joeri Christiaen and myself know each other since our student days. I was at the Conservatory, he was at the animation school and we teamed up for our student works. Later, it became more concrete and we decided to make a short film with the character of the Knight, which was called 850 Meters. Eventually, the short film became a series, and that’s when we teamed up with TeamTO, which is a co-producer of the series. Since this work, compared to the short film, had to be more imposing, I called Jan and asked him if he was interested to work with me on the series. We’ve known each other for a long time, so it made sense to do it together.

Where did you take your inspiration from?

F. S.: I already had a history with the short. With the series, we really wanted to create a universe which, in a way, would be medieval, but with modern elements within it. Joeri gave us total freedom; in the beginning, we explored the medieval side of the music with some elements of instrumentation. For instance, there is a lot of mandolin and guitar parts. After a while, we decided to put some modern elements in it, which made it really fun and silly.

Jan, this was the first time you ever composed a score for an animated project. How did you feel about this?

Jan Duthoy: Well, the challenge was that we were talking about a long show with many episodes. I had already composed a score for a short film called 27, and if you compare it with this work, it is very clear from the beginning that My Knight and Me had to be more consisting. Although I had to face this challenge, I learned a lot from it, in particular about how to make it consisting and surprising at the same time.

How was your collaboration?

F. S.: First, we made a lot of music together, in order to create musical worlds. After a while, when we got the animatics, we took pieces from our library. Actually, the episodes don’t follow up in the beginning, but there is a ramp up. So Jan prepared a session and I finished it: that means that he composed some tracks and I added something to it or edited it. Regarding the songs, because there are lots of songs, we always composed them together. We teamed up, wrote all of them, composed and recorded them, one after another.

Were the songs in the original screenplay?

F. S.: No, they weren’t, actually. What is very special with the way we work is that Joeri wanted to involve music in the very early stage of the production, so when we read the script, there were annotations, like: ‘this is a song lyric’. Then, as we already had composed some of the songs, the animators would work from our music.

Did you feel any mutual influences while working together?

J. D.: Like Fred said, we’ve known each other for a long time and we’ve worked on different projects together or aside from each other. Therefore I think that there is always influence on each other. I remember that in the early stage of work on My Knight and Me, we worked in the same big room, but separately from each other. I worked a lot with analog strings, Fred was doing his thing, and quickly, we decided that we would give an interpretation of each other’s work. So at the end, we listened to each other’s compositions and we started to gather our ideas within the worlds we created. It made the atmosphere stronger and more inspired than if I had done it alone.

How did you incorporate the music and the style of the medieval era and keep it modern and fun at the same time?

F. S.: This began back when Joeri and I worked on 850 Meters. We had this idea of a knight… We made a few tests by reading the scripts to find the character’s right attitude, which would be one of a pop star. We experienced a lot but Joeri and I always really liked this idea and the music had to follow it. The trap you don’t want to fall in is that of leaning towards folk music, but in this case, I think we made it sound more… funky! We wanted to do stuff on instruments like the mandolin that you would never play. Some things inspired me, such as a baroque ensemble that played songs from the Beatles. I listened to them once, but there is no actual direct reference whatsoever.

J. D.: Actually, it came mostly from the experimentation. That was a major part of our work. We started thinking of a medieval ambient, so if you play for instance on a mandolin, you get something instinctively.

Jan, you left the band Absynthe Minded in 2016, with whom you played for ten years. Will you rather focus on composing scores?

J. D.: Well, it’s something that I really want to keep doing. I enjoyed doing it a lot. Actually, I’m still playing as a live musician and I’m currently playing in a band, but apart from these two things, yes, I’d love to do further exploration of score compositions.

Do you have any further projects together?

F. S.: There will be a second series of My Knight and Me, and there is another project from Thuristar, which still is at an early stage, called Mush-Mush and the Mushables. These two projects are going really well. There is another one in development from Thuristar, also directed by Joeri, called Roger Flambé. Composing for a series such as My Knight and Me is not easy, actually. It’s really hard to build an atmosphere, since our pieces are very short, they last, like, twenty seconds max. It would be nice if one day, we could score a feature film, with longer pieces, and maybe, who knows, with a real orchestra! This is an ambition, not only for me, but also in score writing. But I have a special bound with animation, even since before the Conservatory. It kind of evolved as a dream, and I’m glad I can score for animated projects.