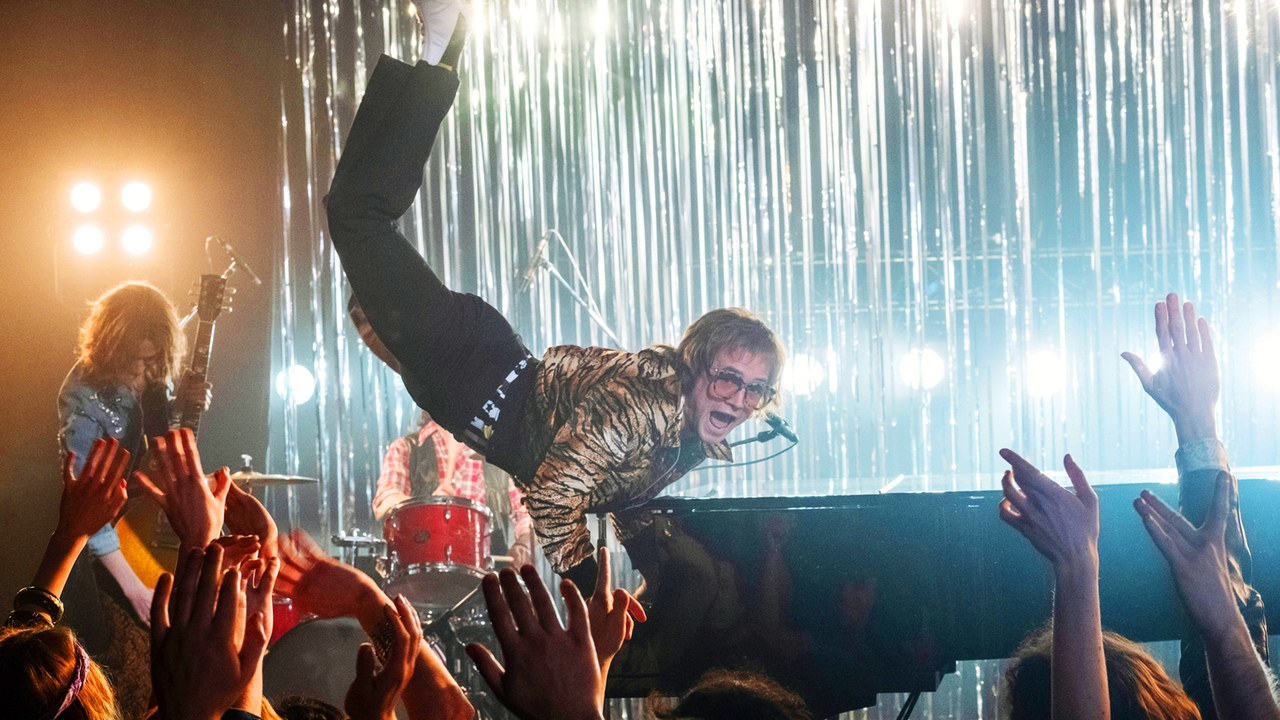 In a time when film theatres are monopolised by Disney productions (i.e. actual Disney films and all of those produced by the ever-growing number of divisions of The Walt Disney Company), to make an independent blockbuster film seems more and more often an act of defiance. That is how we can describe the Elton John biopic Rocketman, which is betting on its outlandish take on the rockstar’s life to stand out from the myriad of other examples that made the success and the unanimous recognition of this genre. This long-in-the-making project, written for the screen by Billy Elliot writer Lee Hall—the same Billy Elliot adapted for West End in 2005 with original music by… Elton John—and directed by Bohemian Rhapsody band-aid director Dexter Fletcher, clearly has nothing to do with the successful yet largely watered-down Freddie Mercury film. Rocketman tries instead to find the very nature of Sir Elton into the aesthetic pursuit of eccentricity and emotion, oxymoronic notions that always coexisted in the life and career of Elton John.

With Taron Egerton‘s scene-stealing reinterpretations of Elton John’s biggest hits—and some other lesser-known songs—it would appear quite difficult for a score composer to leave their mark on such a film. But nothing is impossible for Matthew Margeson, the American composer for whom Egerton has become some kind of muse—Margeson co-composed, with Henry Jackman, the original scores for Kingsman: The Secret Service and Kingsman: The Golden Circle and Eddie the Eagle. Score It Magazine sat down for a chat with Margeson and talked about his inspirations, scoring Rocketman, Taron Egerton’s singing talent, and the difficulty of finding the right voice in order not to be overshadowed by Elton John’s songs. 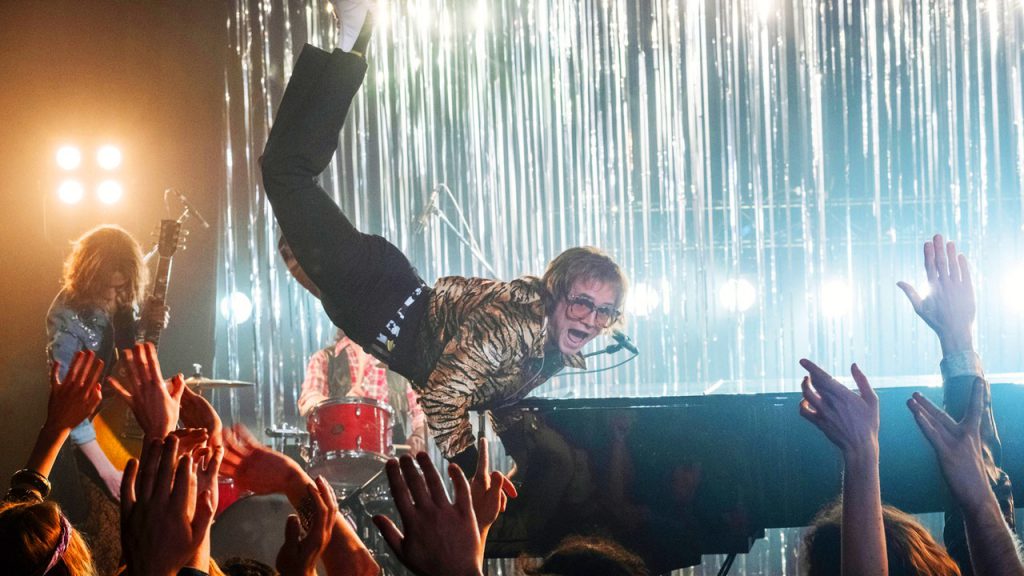 Score It Magazine: How did you arrive on the Rocketman project? Was it through Matthew Vaughn?

Matthew Margeson: I think it was. I did Eddie the Eagle with Dexter [Fletcher] and Matthew, a couple of years ago, and it wasn’t too log after that that we started talking about Rocketman. There wasn’t ever an official, “Do you want to do this?”, the conversation kind of started happening. Being a piano player myself, who wouldn’t dream of doing that project, dissecting Elton’s music?

I don’t think so, but I’m not positive. The moment Matthew and Dexter started talking about it, I think I was involved in the conversation. Dexter and myself had a very good relation while working on Eddie the Eagle. And I’ve worked with Matthew on five or six films. So I think the conversation picked up wherever the last time we were together was.

At what time was it decided that Taron Egerton was going to play Elton?

Well, I cannot give a precise date but when I arrived, he was attached to the role.

Was it already decided that he would be singing and performing the songs himself instead of lip-synching?

I think so. We all know that Taron can sing, that was proved on the movie Sing when he sang another Elton John song. Maybe that was the straw that broke the camel’s back to have him onboard. 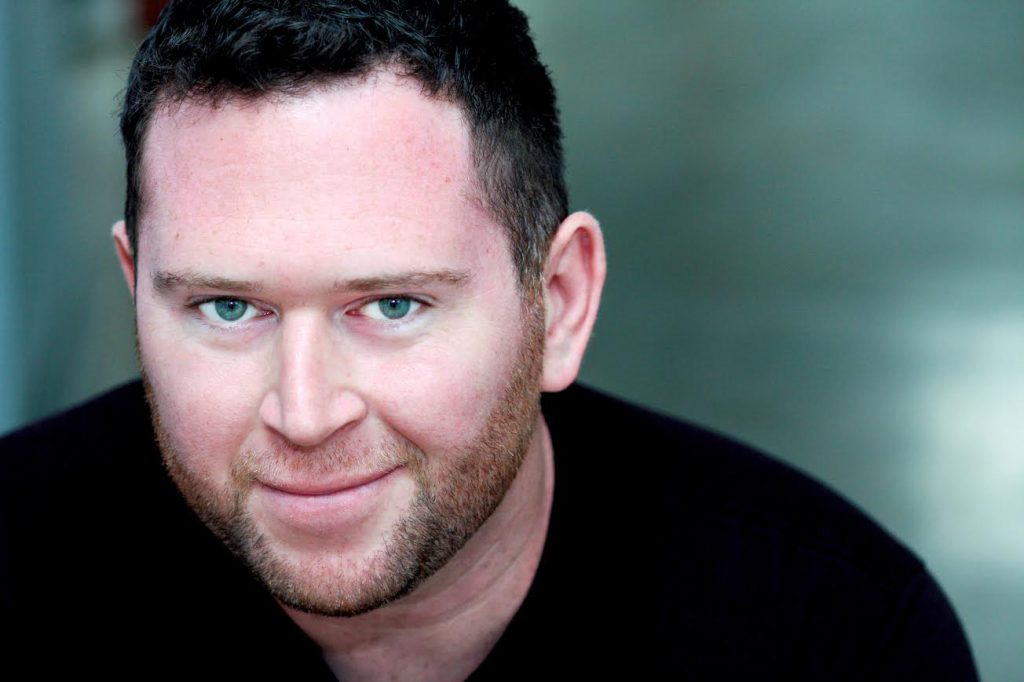 Did you just intervene on the composition of the original music or did you also work on the songs sung by Taron?

I was in charge of the score and there was a whole entire other team that was in charge of the songs. That was headed up by Giles Martin who is a producer in the UK [Editor’s note: and the son of The Beatles’ producer George Martin]. They worked on a lot of songs. Some were complete and some were just in a demo stage when they started filming and that was about a year ago, it was the beginning of last summer I believe. I helped out with a couple of songs, pretty minimally when they needed a bit of orchestration on them or when, you know, there’s few instances of scenes that melt from a score behaviour to singing. So it’s not like, “Oh, there’s a song starting!”, Giles and I had to combine forces that way and figure out creatively how to make the score seamlessly fade away within a song. Some of them proved to be a bit more challenging that others. But from what I know, Taron trained quite a bit, not only to sing, because he already knows how to sing, but how to sing like Elton: the pronunciation, the syntax, the vowels, the consonants. By the time I got involved it was a constant back-and-forth to the recording studio, because what you hear on the screen was recorded on the set: Taron just naturally singing. There was the noise from the set that we needed to replace, or sing this couple of words differently. There was a constant, “Let’s get Taron back into the studio for half an hour and have these lines replaced.” It was a clever collaborative process between Giles and his team, and me and my team, Dexter and Matthew… I’m really proud of ourselves.

The take on this biopic is to make it a fantasy musical. Given that it’s Elton John and that you are yourself a piano player, I can guess we can expect a piano-based original score?

When I first read the script, before even seeing any frame of footage, I went to my piano and wrote a bunch of themes: a theme for young Elton, a theme for his relationship with [Elton’s lyricist] Bernie [Taupin]. I sent them to Matthew, to Dexter, Giles, Taron and everyone seemed onboard with these, and they seemed to work pretty well with the film. And then once I got the picture, I started actually playing these themes, and we all, including myself said, “Why are we trying to reinvent Elton John, musically? We have all of these amazing musical threads, as far as his tunes, his melodies are going, so why don’t we attempt to use those as part of the fabric of the score?”

So then it became trying to figure out how to take his tunes—it is a band playing and him on a piano singing—and how to do a score version of that? How to do an orchestral, choir, brass version of these things? There was bit of experimenting and it turned out really fruitful to do that because certain themes and certain songs became themes for ideas in the movie. One of his beautiful ballads, called ‘I Want Love’, became a theme for his relationship with his parents. And ‘Your Song’ that he writes with Bernie in the movie became a little motif for their relationship and the struggles.

Where did you record the score?

We recorded the orchestra at AIR Studio in London and we did do a bit of recording at Abbey Road, too. There are some songs in the film which are closely related to what you would hear on an Elton John album. But Giles and his team really were able to flip some songs on their side and do really beautiful, alternative takes on these songs: ‘Rocket Man’, ‘Bennie and the Jets’, and so many other songs that you are so used to one sound. To hear it done in a complete different way is really cool. I think they were able to pay a lot of respect to the songs while also doing their take on it.

What part of the scoring process was the most challenging for you?

I’d say finding the right tone for the score. As an American, I tend to really go for the sappy-harp-sting-gimme-the-emotions-bring-out-the-tissues-and-let’s-cry-together sort of thing. With those, we were trying to do very adult things, and trying to find the right level of emotion proved to be pretty challenging for a couple of themes. It would have been easy to be cheesy but we decided to hold back and to let the acting do its thing, and just be there to support it. Once we’d found the balance, it was fine, but the initial struggle to not be too sweet or emotional and to figure out what the right balance of that was, was probably the most difficult part for me on this.

Can you tell us more about your musical upbringing, what you used to listen to back then and now?

From 5, when I really started getting interested in listening to things, to when I was in secondary/high school, I was trained classically on piano. Being an adolescent, my first concert at a stadium was to see Elton John and Billy Joel together. Since I was taking lessons I had to play Chopin and Tchaikovsky. When I went to college I was exposed to jazz. I already listened to jazz but I started to understand it, and I went through this phase where if it weren’t jazz, it wasn’t good, so everything else flew out of the window. And then in my 20s I started to listen to some scores. If I had to choose one, it’d be Cinema Paradiso by Ennio Morricone. All of his tunes are just so memorable. Hans Zimmer, John Powell. He’s at the top of his game right now and he’s doing some stuff we’ve never heard before. I think there’s so much good music out there. As far as what I am listening to right now… Well, a year ago I realised I had stopped listening to new music. I’m listening to couple of bands right now, who are not really new bands but they are new to me… I’m really falling in love with this artist, Francis and the Lights, and this great L.A. band called El Ten Eleven. And NPR always has off-the-wall indie bands, you’re always going to find new gems there.

Have you met Elton John?

I have! There is this new song that him and Bernie wrote for the end credits. I was able to have a little part in the recording of that song. And I was there when Elton came in to record his vocals for that song. When he went into the booth to sing his parts, you were like, “Holy shit. Thats why he’s Elton John.”

I’ve started working on the next Kingsman. I’ll be spending my summer in London.