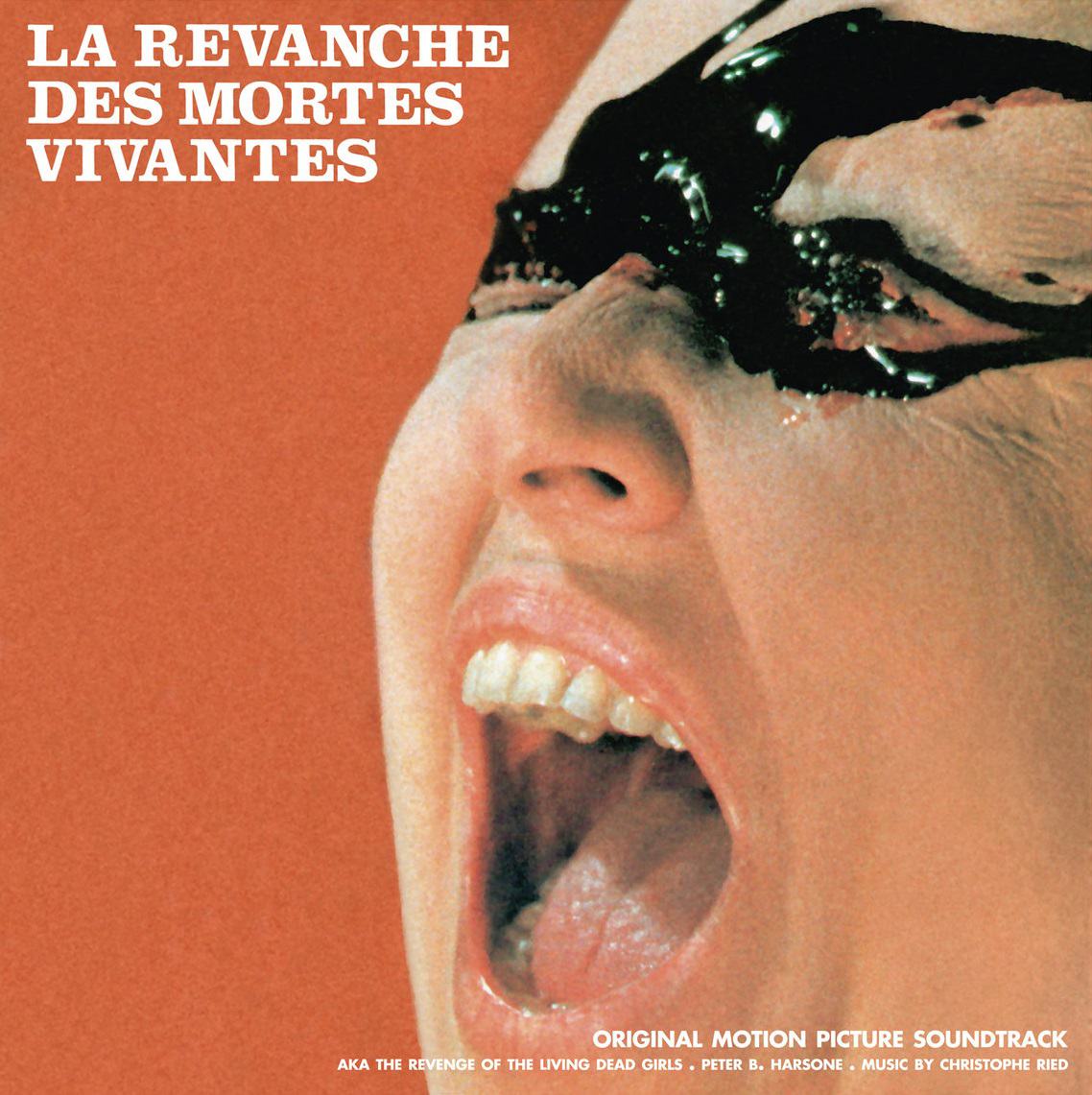 Embark with us on a journey into the history of obscure French film music. Born from an undeniable passion for cult cinema, the independent labels Omega Productions Records and Specific Bis teamed up at the end of 2017 with the purpose of releasing rare French horror film scores, sometimes for the first time ever. Their first joint release was the soundtrack from Jean Rollin’s cult Zombie Lake (1981), composed by prolific French composer Daniel J. White. The result of a thorough job of researching, exhuming and remastering the original tapes, this first attempt was remarkable and very promising. In March 2018, they struck back with not one, but two new releases: Revenge of the Living Dead Girls (Pierre B. Reinhard, 1987) and Devil Story (Bernard Launois, 1985). 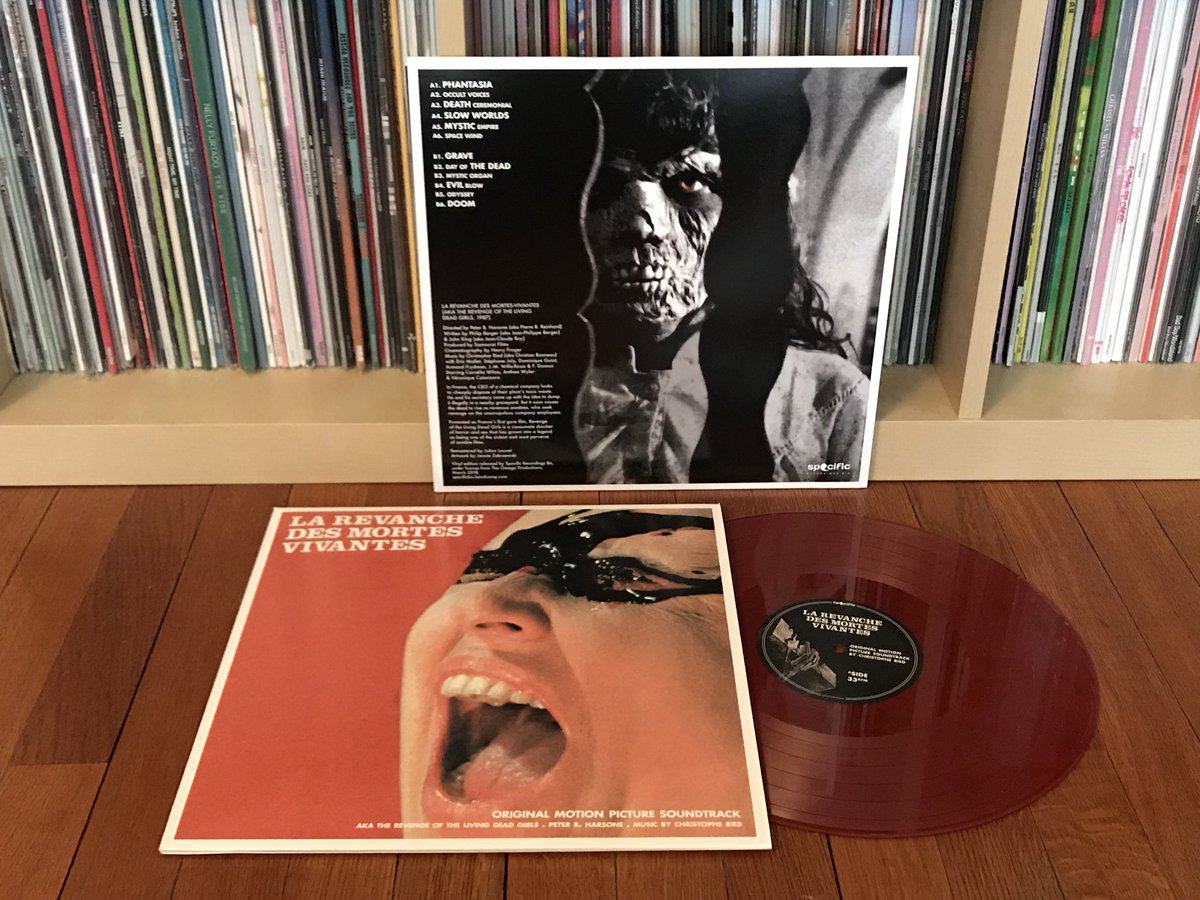 Lovers of bizarre European cinema might remember Revenge of the Living Dead Girls and Devil Story, two films so unbelievably bad they are actually great. Horror has never been part of the DNA of France’s film productions but somehow, maybe because the 1980s were a period of mutation for French cinema – or whatever it may actually have been – some directors gave it a try. Except for a rare handful of auteurish works – among which Possession, Andrzej Zulawski’s unmissable masterpiece of visceral horror – and a couple of already well-established names like Jean Rollin and Jess Franco, horror in France remained at that time a curious exploration field for adult film directors – most of whom also had, at the same time, a second directing career for stupid low- to zero-budget comedies about dumb police officers and/or squaddies. Both Pierre B. Reinhard and Bernard Launois, by taking this step, gave the world two of the most fascinating failures in the history of film.

Meet Christopher Ried, a.k.a. Christian Bonneau, composer of the Revenge of the Living Dead Girls score. He and director Pierre B. Reinhard started working together in the early 80s, when Bonneau scored some of his porn films – all forgotten today if not for their pervertedly funny titles – but the Living Dead Girls score, however unknown, might be one for the ages. With its wicked, artificial sounds fabricated from sampled organs and birds whistles put in reverse, it has the stature of a very solid Italian or British B film. You can blame the film for not featuring enough of the original music, except for the two main themes playing several times over similar scenes, but the album really is a hidden gem that has so much more to offer. Occult Voices and Death Ceremonial, the main themes, are some of the few melody-driven pieces, although they are heavily based on experimentations; both feature a slowed-down pipe organ that brings a feeling of unease too strong to tell. If Hell really has a sound, it has to be ghostly female voices faintly chanting over a slowed-down organ melody. By the way, I don’t know if there’s a Hell and I frankly don’t care because I don’t believe in it, but if there is, you’d better believe me because I literally felt the Devil’s presence while this very track was playing out loud in my living room. The organ is also used for its actual sound, like the composer does on Mystic Organ, some kind of short death march that brilliantly encapsulates the romantic aspect of the gothic horror’s musical representations.

Most of the rest of the album is made of experimental pieces and atmospheric sounds; it goes without saying that if the Devil appeared to me at track 2, the strange, uncomfortable feeling given by Ried’s score is something that lasts for the whole 35 minutes of the vinyl issue. But what is even more striking than that is how the composer plays with the very concept of a film score, long before this idea began to be expanded by other, more renowned composers. Some tracks like ‘Slow Words’ or ‘Mystic Empire’ are purely abstract pieces. ‘Space Wind’ blurs the lines between score and sound design in a very curious way: it overlays the constant blow of a menacing wind to birds’ whistles that the composer himself recorded and then put in reverse, giving a single note that resembles the screechy strings from Psycho, except they are playing without a pause for three minutes. An original 1986 release of the soundtrack featured a track called ‘Death Moments,’ maybe the most WTF moment of the album: it compiles all the deaths from the film – with original score when there is one – for three and a half minutes. The whole collection of failed French scream queens, poor sound effects and the curious juxtaposition in the editing of these five moments really is something to live for. Unfortunately, this deliciously cheesy and ridiculously funny piece is not on the 2018 release of the score, but you will still be able to enjoy it on the CD and digital versions. 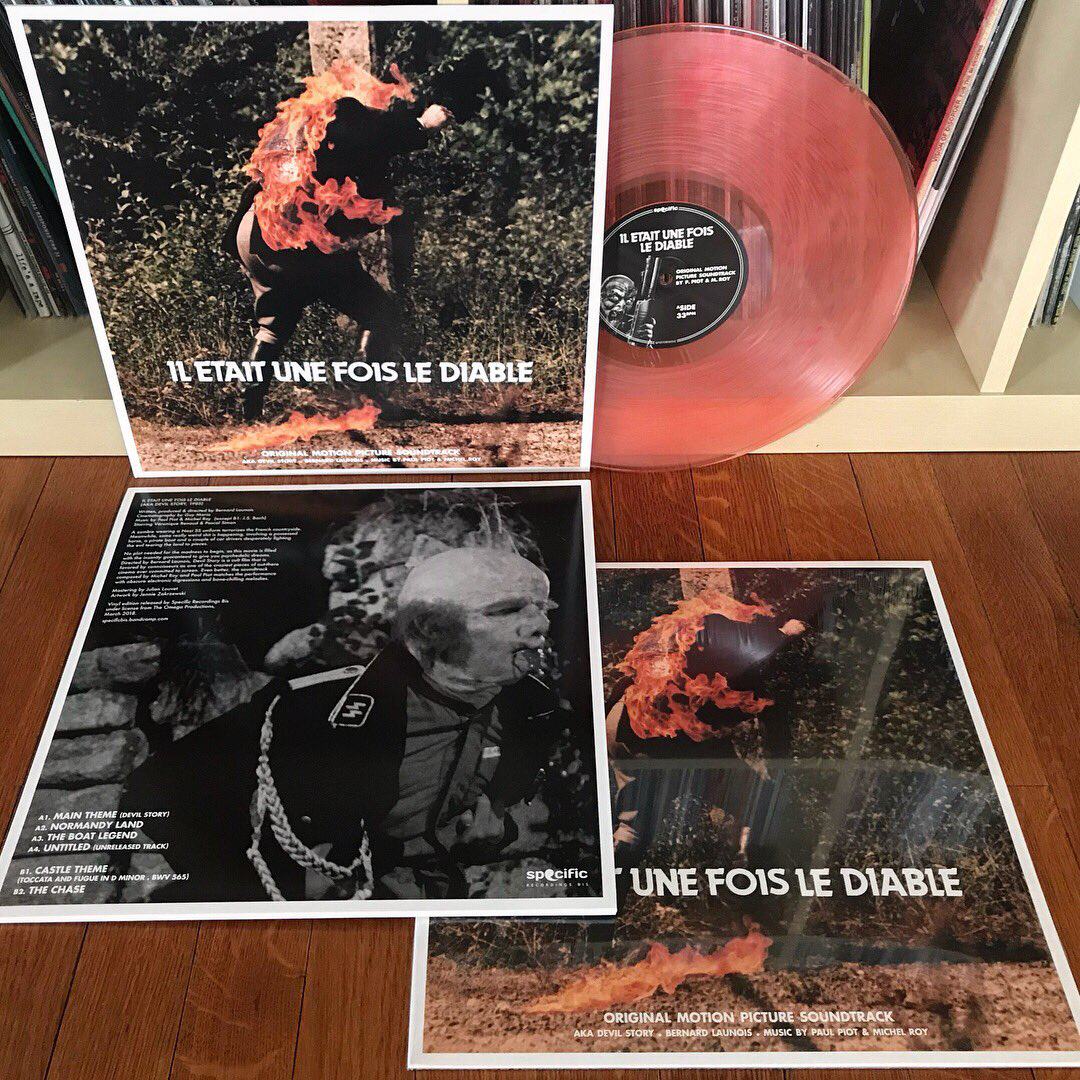 However unsubtle in how it mixes humour – sometimes on purpose, sometimes not – erotism and bad horror, Revenge of the Living Dead Girls remains a ridiculously funny film with fine gore effects – made by a then young Benoît Lestang, who would become later one of the most accomplished make-up artists in French cinema – and ends with a twist that might just well surprise you. But digging even deeper in the underworld of 80s French horror, you will find Devil Story, which has also been called “France’s first gore film” – it is not – by its writer/director, Bernard Launois. And I must say, although I’ve seen it maybe five or six times, I can’t tell what it really is about. A Nazi zombie, a demonic horse, a mysterious cat, a mummy, an old gipsy witch, a ghost ship and the world’s least accurate hunter all find themselves at the same time in a small town in Normandy; that is about all you can get from the film. Why they are there, what their goal is, or even what they say… Maybe David Lynch himself won’t get it. For that reason, Devil Story remains a must-have for all fans of laughable, plain-dumb films… and who knew its score would have such a cool release?

With its long themes made of discordant, repetitive motifs, it is obvious from the very start that the Devil Story score is as weird and dysfunctional as the film itself. The overwhelming presence of the organ nearly makes you forget about the electronic compositions and immerses the listener in a rough, clumsy gothic atmosphere. Among the compositions for the film, there is even a reworking, sometimes approximate, of Bach’s Toccata, the ultimate cliché in horror film, used for each shot of the castle – and appropriately renamed ‘Castle Theme’ – which is of course one of the film’s main locations.

The Devil Story score constantly tries to be grand but in the end, it terribly lacks elegance. ‘Boat Legend’ is one example of that, an orchestral piece with horns and strings which has the flavour of one of those bad, old pirate films you wouldn’t even remember a week after having seen it. But isn’t this what makes its indisputable charm? Then there remain two incredible electronic pieces. ‘Normandy Land’ might be the album’s strangest moment: as its title would suggest, it is supposed to reflect the atmosphere of the locations. What we have instead is an ambient cue on which the composers overlay a guitar strum and an Ennio Morricone-like melody on banjo. Finally, the album closes with ‘The Chase,’ a suspense piece led by electronic percussions, marked by sudden string notes which sometimes go along with the rhythm and other times change it.

Outside of France’s niche of cult and deviant film lovers, Revenge of the Living Dead and Devil Story are, to put it mildly, unbeknown to the rest of the cinephilia world. Thus, one last question remains: will these films be outlived by their scores? The proper objects are beautiful: coloured vinyls, amazing artworks by Jennie Zakrzewski – co-founder of Specific Bis – made from original film shots’ details… The scores are obviously not the genre’s greatest pieces, but they deserved the great work of rediscovering and mastering from the original tapes, which otherwise would probably have been lost. We can’t thank Omega and Specific Bis enough for giving rightful attention to these rare film composers and for bringing them into the light of day, and we will absolutely look forward to the deviant choices and the unquestionable quality of their future releases.