Freshly issued for the first time on vinyl by Varèse Sarabande, the Jerry Goldsmith score for L.A. Confidential is an outstanding avant-garde tour de force disguised behind a nervous jazz-flavoured action score.

We tend to forget how much the advent of film noir had an impact on the way Hollywood composers reconsidered the whole process of writing and composing music for film. We can’t imagine the misadventures of a late-thirties, down-on-his-luck alcoholic man in a desolate Los Angeles filmed in black-and-white without the usual mobsters on his heels, the evil seductress… and the infectious, dissonant score that goes along with them, often led by a strong brass section. Adolph Deutsch, Max Steiner and Miklos Rozsa have played a prominent role in the Golden Age of Hollywood in giving film noir its own recognisable musical language.

That brings us three decades later, when a 45-year-old Jerry Goldsmith, who just earned his sixth Oscar nomination for Papillon, was called to score Roman Polanski’s last film in the United States, Chinatown, after the producer rejected Phillip Lambro’s compositions at the last minute, judging after the test screenings that they were unsuccessful. The rest is history: in only ten days, Goldsmith wrote and composed the legendary score everybody knows today, replacing Lambro’s way too evocative compositions by elegant yet melancholic – and anachronic – tunes that set the mood of 1930s Los Angeles, played by a customised jazz ensemble and globally acknowledged today as one of the best achievements in film scoring. 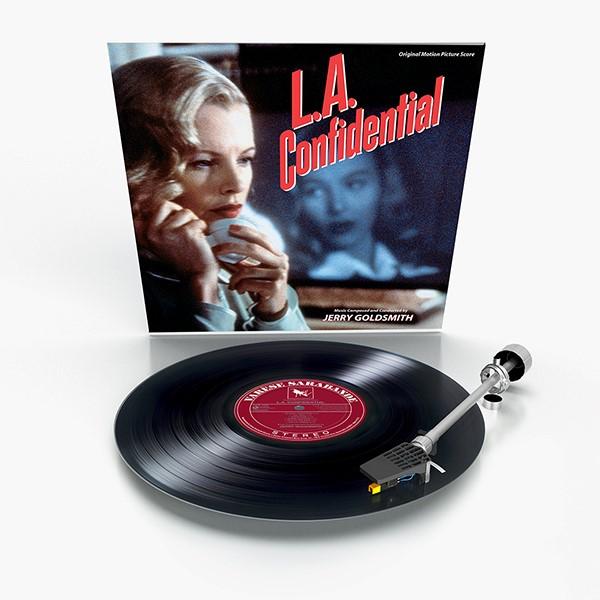 More than twenty years after Chinatown, Goldsmith came back to the film noir genre, this time considering it through the entire spectrum of his mastered techniques and the technical and musical possibilities of the 1990s. The composer, who based his writing on a musical motif by Leonard Bernstein from the Kazan/Brando classic On the Waterfront, makes way for a bleak, intense score that might leave the unwarned listener a bit confused. Extremely modern – Goldsmith does not spare the use of synths and electronic noises in the final mix – L.A. Confidential gives another idea of a classic, orchestral film noir score. There are some trumpet solos which appear like a legacy from Chinatown, bringing the softness necessary enough to connect the score with the 1940s lounge tunes that can be heard in the film, but the genius of Goldsmith is to have them coupled with unsettling suspense cues (‘Susan Lefferts’, ‘Bloody Christmas’). Rooted in jazz – lounge-style jazz that fits the mood of the pre-recorded material heavily featured in the film – there is a whole side of these original compositions that provide enough melancholy and mystery to the score to call it a remote descendent of Chinatown, with Kevin Spacey’s Jack Vincennes – a character perfectly defined by the songs – as an eccentric, secret-hiding third-degree cousin of Jack Nicholson’s J.J. Gittes.

What characterises most L.A. Confidential, though, is the composer’s fascinating attraction for percussions. The opening track (‘Bloody Christmas’), an outstanding effort in the action style, witnesses the importance given to timpani, an instrument that has honestly more to do with 1990s action film scores than with jazz compositions for noirish crime dramas. But when used in this particular configuration, it triggers remembrances of past Goldsmith landmarks, such as Planet of the Apes and Capricorn One. And the composer goes one step further: in L.A. Confidential, percussions help him shape a dangerous melodic construction that continuously goes back and forth between soft melodies and deafening noises. This game of attraction-repulsion completely made up by Goldsmith by abruptly switching between jazz melodies, symbolised by the main theme played on the trumpet, and extremely heavy action cues in which percussions and modern instruments are predominent, still sounds strange today and, for the unwarned listener, is quite painful to lend an ear to. But that is actually an extension of Goldsmith’s avant-garde compositional techniques. The 1990s were a tough time for Goldsmith, who was very busy scoring an impressive number of films per year, but L.A. Confidential was too good an opportunity for him to revisit for a last time a big classic Hollywood score in his own terms, in the most experimental way he could for a film as consistent as that one.

Jerry Goldsmith, who would have turned 90 yesterday, composed another dozen film scores before his death in 2004, some of them truly great (Small Soldiers, The 13th Warrior). But somehow, L.A. Confidential would be the last expression of his immense talent, that of a Hollywood pillar who fell into the limbs of an industry relentlessly producing money-machine films with no time for true artists to reinvent themselves. With his constant need to nurture his art with new techniques and creative musical languages, Jerry Goldsmith created an impressive yet short (the album is 30 minutes long) piece of avant-garde art that retrospectively might well have played a role in the current development of orchestral/electronic scores. Only issued on CD, L.A. Confidential is now available for the first time on vinyl, released on February 1st, 2019 by Varèse Sarabande.