Review: A Star Is Born / The Trouble With Gaga 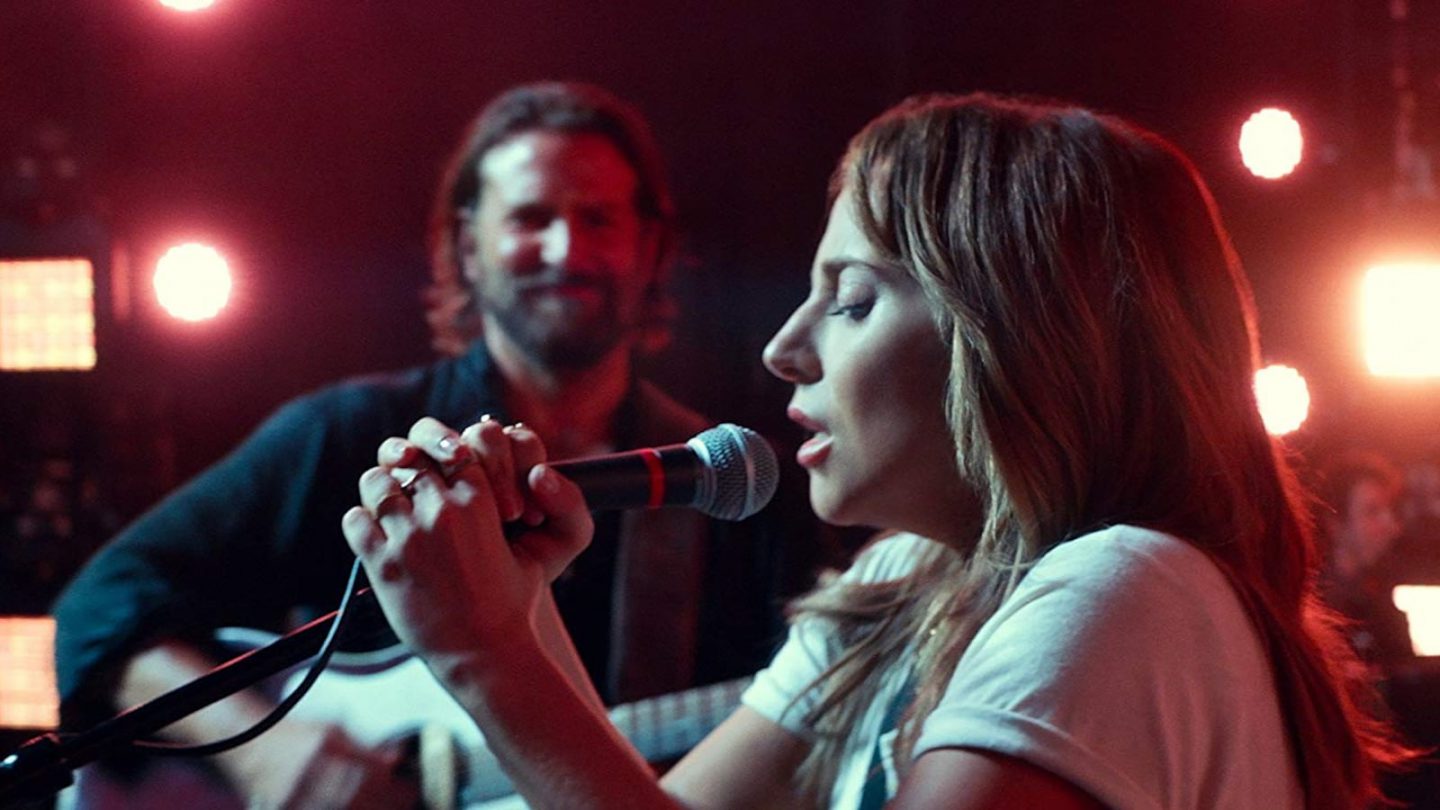 Tonight, the Oscars ceremony, which will close the awards season, has strong contenders in every category. But A Star Is Born could create the surprise, after his triumphant performances at both the Golden Globes and the Grammys. With eight nominations, including Best Picture, the ultimate Hollywood story about love and music directed by Bradley Cooper has proven that its huge commercial success is not an obstacle to make a clean sweep at the ceremony. But how much does A Star Is Born really loves music? 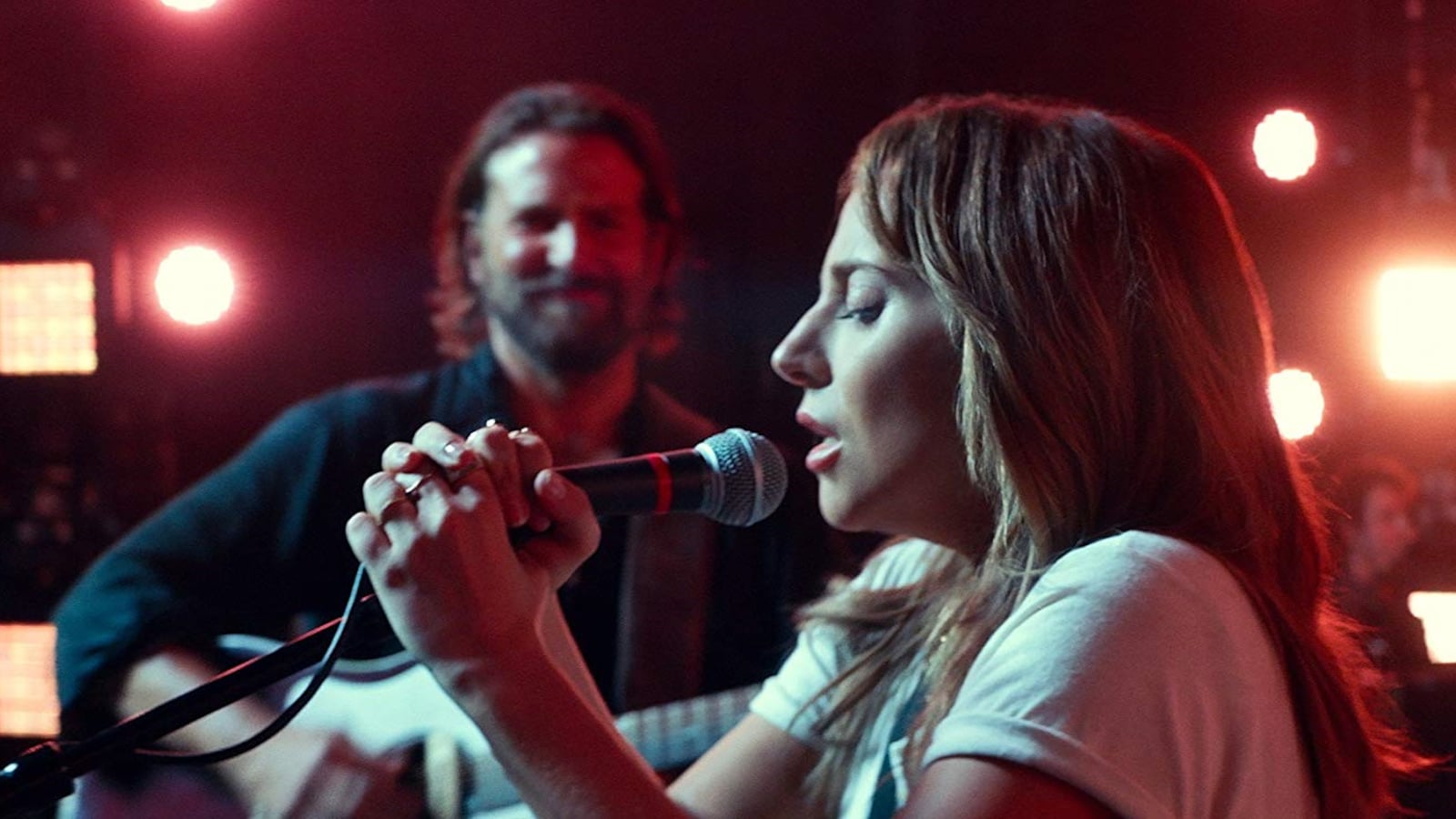 Bradley Cooper and Lagy Gaga in A Star Is Born. Warner Bros. Pictures. All rights reserved.

The Trouble With Gaga

In more than a hundred years of history, Hollywood has constantly invented and reinvented the American myths: from the cowboys until today’s superheroes, supercops, superwarriors… and, once in a while, superstars, the only American myth that has always existed but never quite reinvented itself. And who better than Bradley Cooper, the most old-fashioned guy under 50 in Hollywood, to tell the ultimate all-American tale about fame, wealth and love?

In the central sequence from A Star Is Born, Jackson Maine (Bradley Cooper) invites Ally (Lady Gaga) to perform her own song on stage in front of thousands of people, in a spine-chilling duet that is the film’s apex. It is undeniable that the real – and probably the only – purpose of the film was for Cooper to find the normal, human person behind Gaga, take her and bring her all the way up to the highest realm of stardom and glory. And it is very troubling to see how the real life imitates what we see in the second half of the film. And that is what makes A Star Is Born rigorously complex and at the same time, ridiculously simple. Cooper knew deep down that his film was just a story within another story: the big story being real – and it could end by being awarded an Oscar for Best film.

As I was diving into the depths of my couch, the one and a half hour following the ‘Shallow’ sequence unfolding before my bewildered eyes, I could not stop thinking about how old this film was – and not in a ‘good old’, ‘vintage’ way. It has been a few years now that it appeared clear to me that Bradley Cooper is an enhanced version of your reactionary uncle – enhanced because he is better-looking, funnier and more talented, so he’s welcome at my Christmas table any time he wants. Because yes, showing up at a Democrat convention does not prevent anyone from having fixed ideas so profoundly rooted in oneself that one does not even see what the problem is with that (see: the Dave Chappelle moment). So, even though the story is fictitious, the cornerstones of A Star Is Born are the same as, say, The Greatest Showman (that is building a bigger-than-life tale aout fame and stardom, told with a sizeable dose of Hollywood revisionism).

I think what Bradley Cooper saw in A Star Is Born was a unique occasion of getting involved, through art, with a self-cathartic experience so he could externalise his frustration. While he accentuated his New Hollywood charisma in many of his films, his character in A Star Is Born gives him the opportunity to ‘impersonate’ his own icons. Jackson Maine is essentially an homage to legends of 1960s-980s American cinema, and the more you go through the film, the more you feel the influences of Clint Eastwood, Robert Duvall, Kurt Russell and, of course, Jeff Bridges. I mean, the guy has even cast Sam Elliott to play his brother! Bradley Cooper and Lagy Gaga in A Star Is Born. Warner Bros. Pictures. All rights reserved.

Also expressed is Cooper’s frustration with today’s pop music, and we can wonder how relevant is such a film when its main character is played by the queen of pop herself. The film is all based on dichotomies: the opposition between Ally, the soon-to-be pop star, and Jackson, the declining country singer; between fame, including looking good at the Grammys, and trying to remain the honest, simple person you are deep down; between the tortured mind of jealous Jackson and the body and mind-positivism of Ally. Yes, these have been seen a thousand times, and yes, the only middle ground is love. But there is one opposition at the heart of the film that does not find any compromise – music.

In Cooper’s film, as in every film expressing ideas from another time, the writing rejects everything that is new. And what is new here is another kind of fame, the kind of fame that Jackson never knew in his career. Having dancers on stage, shooting videoclips, performing on SNL with playback music, this is the world we live in, this is the world of which Ally becomes the ambassador, and we cannot blame Cooper for lashing out at the industry. But in the second half of the film, it clearly becomes Cooper’s obsession and it goes much further than just this. In Cooper’s eyes – well, ears – country music is the purest form of music there is. He uses it to talk about love, righteousness and simplicity, it is accessible to everyone and it expresses his own integrity. It reflects the old, masculine idea of America, back when men were hard-working souls living in peace (‘It takes a lot to change a man/Hell, it takes a lot to try,’ he sings, and – spoiler alert – he never changes). On the opposite, pop music flourishes in its fakeness, in its exaggerations, in building the image of a personality who does not represent who she is. Before becoming a pop icon, Cooper uses a lot of close-ups to show Ally to the world, whether she is in drag singing ‘La Vie en Rose’ or perfectly natural when they sing ‘Shallow‘, or again later, when she sits at a piano and gives an incredible performance on ‘Always Remember Us This Way’. But when she becomes the huge pop star that provokes fainting among her new, teenage fanbase, she is always shown from far or through a screen, and he insists on it so much that you have the sensation that Ally has vanished from the film. That is how much Bradley Cooper hates pop music.

When it comes to the actual songs, though, it becomes radically violent. Besides the fact that the pop songs sound like early, failed attempts from Gaga to write during her The Fame/The Fame Monster era, the lyrics are so poorly written and so cliché that you end up wondering, ‘Am I supposed to think these songs are bad?’ When she sings, ‘Dose me with your energy/Leave your soul inside of me/Cool me down and calm me/Ring me, don’t alarm me’ on the most unbearable EDM composition, believe me, you can’t unhear this. But we do not know if the songs are really bad or if it is just Jackson who hates them, because Ally never questions herself or what she has become. The new her is completely destroying her lover, giving more importance to the fame she has long tried to reach – and that makes her father so proud – than to try to make the ‘fake’ Ally and the ‘real’ Ally coexist together. Maybe she does, maybe she also knows that her pop songs are bad and maybe she tries her best to keep her integrity even though she is forced to do things she doesn’t want to, like appearing with vivid red hair, even if a few minutes before she expressively refused to dye her hair blond. We will never know that because, as for many other pending questions, there is no answer in the film. So we can only assist to the story of someone who, by chance – and also because of her obvious talent – becomes a star, and who is ready to face everything to keep her stardom secured – even death.

There is a lot of darkness and negativity in Cooper’s vision of Ally’s character, and I wonder how the first-time director approached Lady Gaga when he had in mind to offer her the part, while being completely aware that he would heavily criticise nearly everything about Ally from the moment she reaches stardom. This is confusing given that Ally and Lady Gaga’s career are the same but in reversed chronological order. So, what is the trouble with Gaga? Is A Star Is Born just another step in her career in order to show her various skills? Just like when she explored further directions with her jazz (Cheek to Cheek, 2014) and Americana (Joanne, 2016) albums (both beautiful yet underrated attempts for the artist to open up to new horizons and to contribute in showing her skills, both as a singer/songwriter and as a musician), rather than helping her build a new image? Or does it mark the irrecusable end of something that she would rather leave behind, convinced that the future of Gaga lies in Ally’s success? Again, the film does not answer to that. But we can catch glimpses of a possible answer in real life, when the provocateur pop star who created scandals for appearing in a meat dress or from pulling ‘creative rebellion’ by being puked on by a vomit artist on stage, unrecognisably appeared as a white-as-snow, fragile diva at the Golden Globes. And in the very last scene, in which Ally has unambiguously become an actual diva – the final song, ‘I’ll Never Love Again’, is even performed in an unexpected Whitney Houston-inspired mood – and closes the film by looking directly at the viewer, intertwining again the eternal cinematic cliché and the intensity of Gaga’s final appearance, as if she were trying to convince the viewer that she, Lady Gaga, is henceforth reborn this way.